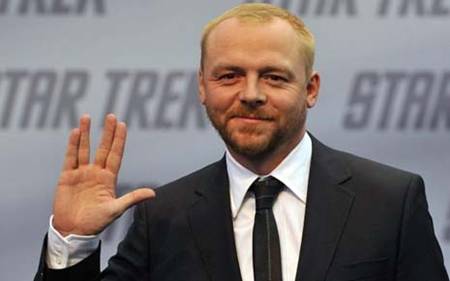 Simon Pegg has got a lot going for him: he co-wrote and starred with Nick Frost in a sci-fi comedy Paul, he also embodied engineer Montgomery Scott in the eleventh Star Trek movie, he furthermore voiced Reepicheep, the heroic sword fighting mouse in Chronicles of Narnia: Voyage of the Dawn Treader, and Pegg will be also reprising the role of Benji Dunn in Mission: Impossible – Ghost Protocol. Well, that Simon Pegg has begun filming the psycho-comedy, A Fantastic Fear of Everything at Shepperton Studios in London, three weeks ago. Pinewood Chief Executive Ivan Dunleavy, said of that:

We are thrilled to be announcing Pinewood’s involvement in A Fantastic Fear of Everything. We have waited for the right project, at the right time to launch our new investment scheme and with the involvement of Keel Films, Universal Acquisitions and Simon Pegg this is the perfect fit for the Studios.”

A Fantastic Fear of Everything is scribed by musician Crispian Mills (Kula Shaker’s frontman) who is co-directing with video director and animator Chris Hopewell (Radiohead and The Killer’s promo). Simon Pegg portrays Jack, a children’s author turned crime novelist whose detailed research into the lives of Victorian serial murderers has turned him into a paranoid shell, having the irrational fear of being murdered. A Fantastic Fear of Everything is also attached to star Amara Karan, Clare Higgins, Sheridan Smith and introduces Alan Drake. In addition, Crispian Mills tweeted this week:

My amazing missus gave birth to our second baby boy two weeks ago! That same week I also finally started filming the movie- now titled A Fantastic Fear Of Everything. Mad times but very exciting.”

Continue Reading
Advertisement
You may also like...
Related Topics:A Fantastic Fear of Everything, simon pegg