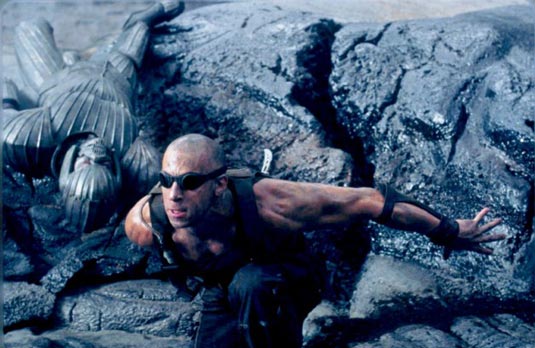 Vin Diesel has revealed earlier that Universal Pictures gave the green light to Riddick knowing that it would be an R-rated movie, and now we’ve got the official confirmation from the MPAA. Written and directed by David Twohy, Riddick has been rated R for “strong violence, language and some sexual content/nudity.” There was some concern before about it not getting the R rating considering 2004’s The Chronicles of Riddick was rated PG-13. The original film, Pitch Black, was of course rated R. Synopsis: The infamous Riddick has been left for dead on a sun-scorched planet that appears to be lifeless. Soon, however, he finds himself fighting for survival against alien predators more lethal than any human he’s encountered. The only way off is for Riddick to activate an emergency beacon and alert mercenaries who rapidly descend to the planet in search of their bounty. The first ship to arrive carries a new breed of merc, more lethal and violent, while the second is captained by a man whose pursuit of Riddick is more personal. With time running out and a storm on the horizon that no one could survive, his hunters won’t leave the planet without Riddick’s head as their trophy. A specific release date for Riddick has not been set as of yet, but what we do know is that the anticipated film also stars Karl Urban, Jordi Molla, Matt Nable, Katee Sackhoff, Bokeem Woodbine, Dave Bautista, Conrad Pla, Raoul Trujillo, Nolan Funk and Keri Hilson.
Continue Reading
Advertisement
You may also like...
Related Topics:Bokeem Woodbine, Conrad Pla, Dave Bautista, David Twohy, Jordi Molla, Karl Urban, Katee Sackhoff, Keri Hilson, Matt Nable, Nolan Funk, Raoul Trujillo, Riddick, Vin Diesel

GHOSTBUSTERS 3 Shoot Delayed Until Next Fall?
Christoph Waltz To Join The Cast Of THE MUPPETS Sequel
Advertisement