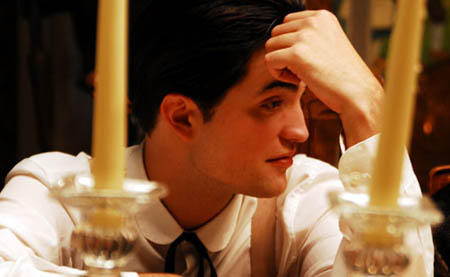 Pattinson plays an 18-year-old Dalí who moves to Madrid where he begins experimenting with the cubist style that launched his young career. Set in 1920s Spain, the film focuses on poet Federico García Lorca (Javier Beltrán) and the intense bond he forms with Dalí (Robert Pattinson) while attending art school in Madrid. Dali swore that Lorca’s lust for him never became physical, but screenwriter Philippa Goslett’s take on the relationship is much steamier. “The film’s Web site promises that it will come to select theaters in 2009 and that it is rated R for “sexual content, language and a brief disturbing image.” Clearly, Pattinson’s “Twilight” follow-up will be a long way from Stephenie Meyer’s best-selling young-adult novels — but his loyal fans are already eager to see if he will once again dazzle them.” [MTV] “Little Ashes” is directed by British filmmaker Paul Morrison from a script by Philippa Goslett. The film first premiered at the Raindance Film Festival in the UK and is being distributed in the US by Regent Releasing. No official release date has been set for “Little Ashes,” but we can expect it to see it play in limited theaters during the first-half of 2009.

In 1922, Madrid is wavering on the edge of change as traditional values are challenged by the dangerous new influences of Jazz, Freud and the avant-garde. Salvador Dali arrives at the university; 18 years old and determined to become a great artist. His bizarre blend of shyness and rampant exhibitionism attracts the attention of two of the university’s social elite – Federico Garcia Lorca and Luis Bunel. Salvador is absorbed into their decadent group and for a time Salvador, Luis and Federico become a formidable trio, the most ultra-modern group in Madrid. However as time passes, Salvador feels and increasingly strong pull towards the charismatic Federico – who is himself oblivious of the attentions he is getting from his beautiful writer friends, Margarita. Finaly, in the face of his friends’ preoccupations – and Federico’s growing renown as a poet – Luis sets off for Paris in search of his own artistic success. Federico and Salvador spend the holiday in the sea-side town of Cadaques. Both the idyllic surroundings and the warmth of the Dali family sweep Federico off his feet. Salvador and he draw closer, sharing their deepest beliefs, inspirations and secrets, convinced that they have found a kind of friendship undreamt of by others. It is more that a meeting of the minds; it is a fusion of souls. And then one night, in the phosphorescent water, it becomes something else…