Connect with us
Check out the official movie poster for Robert Pattinson’s next film, “Remember Me.” 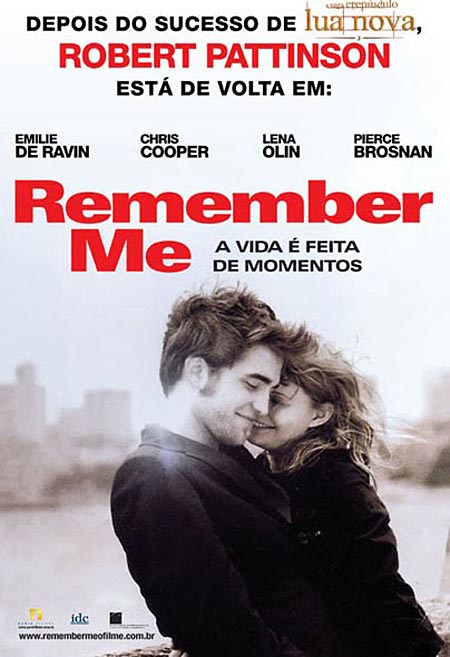 Pattinson plays a young man whose brother’s suicide has split up his parents (Pierce Brosnan and Lena Olin) and left him sleepwalking through life. Emilie De Ravin will play a young woman who, after watching her mother get killed before her eyes, seizes life to its fullest. Chris Cooper is being courted to play her father. Will Fetters penned the script, with a rewrite by Jenny Lumet (’Rachel Getting Married’). Nick Osborne and Trevor Engelson are producing through their Underground Films banner. “Remember Me” is directed by Allen Coulter (Hollywoodland) and is scheduled to hit theaters on March 12th, 2010. Check out “Remember Me” trailer too! Post you opinion about poster and if you’d like it or not? Are you going to see Pattinson star in a film outside the Twilight Saga?
Continue Reading
Advertisement
You may also like...
Related Topics:Allen Coulter, Chris Cooper, Emilie de Ravin, Lena Olin, Pierce Brosnan, Remember Me, Robert Pattinson