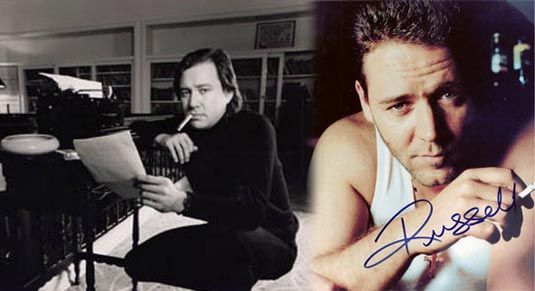 Ridley Scott‘s Nottingham has been pushed back indefinitely but at least until Spring but star Russell Crowe not wait. Instead, he’s trying to get underway with a new biopic of achingly cool comedy legend Bill Hicks. For those of you not in the know, Hicks was one of the smartest, most acerbic comedians of the 80s and early 90s, who struggled with drink and drugs before getting his career back on track – only to fall victim to cancer at just 32 years old. Despite his tragically young death, he lived long enough and worked hard enough to influence pretty much every comedian since, and has been paid tribute in everything from The Simpsons to the comic series Preacher. The Oscar winner said it would be at least seven months before the film gets off the ground in England, allowing him to spend more time at his Woolloomooloo home with wife, Danielle Spencer, and sons, Charlie, 4, and Tennyson, 2, and working on other projects.

“I have another project based on the life of comedian Bill Hicks, which is going from treatment to draft stage with Kiwi writer Mark Staufer.”

Yes, New Zealander Mark Staufer is scripting, according to the Sydney Morning Herald.

The clip from Bill Hicks ‘Revelations’ in which he discusses drugs.