I’m always excited about those first look images especially when we have such a huge project on the road. As you probably know, Ruben Fleischer’s Gangster Squad is set to open on January 11th, 2013 so now is the perfect moment for all of us to check out the first look at Sean Penn and Josh Brolin in the whole thing and to hear some new details about this 1940s crime thriller straight from a director! What I definitely like about this image is the fact that everything looks so…old? Not in a bad way of course! We haven’t seen Sean Penn until now, and with all due respect, I was little bored with all Ryan Gosling images that we had a chance to see. Ater all, Penn stars as central guy, gangster Mickey Cohen who runs from justice, while Brolin is on board for the head of the so-called Gangster Squad. But as I said at the beginning of this report, I’m here to share some fresh plot details with you, which director Fleischer revealed in an interview with EW. He said: “O’Mara (Josh Brolin), our lead character, has just come back from fighting the Nazis with all these ideals after seeing America at its greatest. And he’s come home and there’s a gangster running his city. While he was gone, Mickey Cohen (Sean Penn) took over and he turned the streets of L.A. into a battle zone.” He also added: “In our story, O’ Mara takes the lead of the Gangster Squad, a vigilante police force that fights the gangsters on their own terms, and the battle between them is for the future of Los Angeles: whether it’s going to become corrupt and run by this bunch of gangsters or these guys who fought for these values and want L.A. to be the shining beacon on the west coast that it was always intended to be.” As you already know, the rest of the cast includes Emma Stone, Nick Nolte, Michael Pena, Anthony Mackie and Giovanni Ribisi. Let us know what you think and stay tuned! 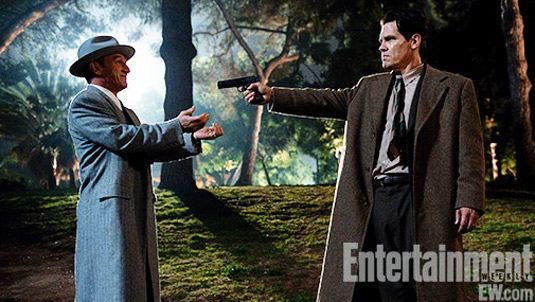