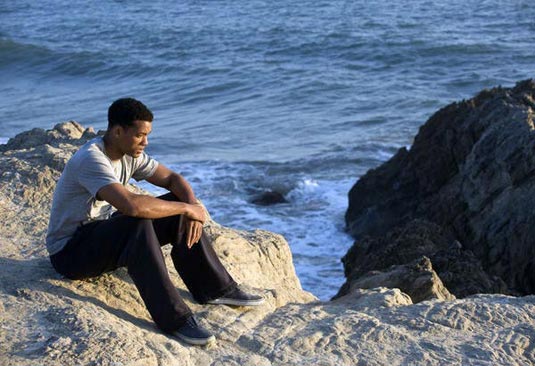 “Seven Pounds,” which reunites Will Smith with Gabriele Muccino (who directed him in “The Pursuit of Happyness”), begins with a series of riddling, chronologically scrambled scenes. A man calls 911 to report his own suicide. He badgers a blind call-center employee – whom we suspect will be a significant character, since he’s played by Woody Harrelson – with complaints and insults. He embraces a lovely woman in an even lovelier beach house. He visits a nursing home where he terrorizes an administrator and comforts a resident. For a while it is pleasant enough to contemplate these loose ends, and to tease from them the possible contours of a story. It is never unpleasant to watch Mr. Smith, who likes to play peekaboo with his charm, hiding it now and then behind fleeting shadows of anguish or malice. The music (Angelo Milli‘s score and a handful of emotive pop songs) combines with the deep colors of Philippe Le Sourd‘s cinematography to summon up intensities of sentiment not yet arrived at by the narrative, creating an interesting frisson of suspense. After a while, though, as the pieces of the puzzle snap together, curiosity gives way to incredulity…full story [The New York Times] Within the movie’s first 20 minutes, it becomes clear that Ben is auditioning candidates — but for what? It appears he wants to make sure these candidates are really nice people, deserving of whatever largess he has the power to bestow upon them. Perhaps he’s running his own version of the Publisher’s Clearing House Sweepstakes? But unlike Ed McMahon, he’s not going to show up at just anyone’s house with that big fat check. As I think more about the plot, I can barely believe I’m not making it up. In fact, I wish I were making it up. But “Seven Pounds” — which was written by Grant Nierporte and directed by Gabriele Muccino — is all too real. Muccino directed Smith in “The Pursuit of Happyness,” a deeply affecting picture (based on a true story) about a guy who can’t make enough money to keep a roof over his head and that of his child, but who, after just squeaking into a stockbroker-training program, is able to turn his life around. The picture conveyed how easy it is to hit a few bad breaks and suddenly find yourself living close to the edge, even in the so-called land of opportunity. And Smith’s performance was piercing partly because he’s simply so winning as a performer: If the most likable guy on Earth can nearly slip off the edge of it, then the rest of us had better be wary. (I’m wondering how “The Pursuit of Happyness,” made in 2006 and set in the 1980s, would look now, given the terrifying state of our economy, but I’m not sure I can bring myself to watch it.) …full story [Salon.com] 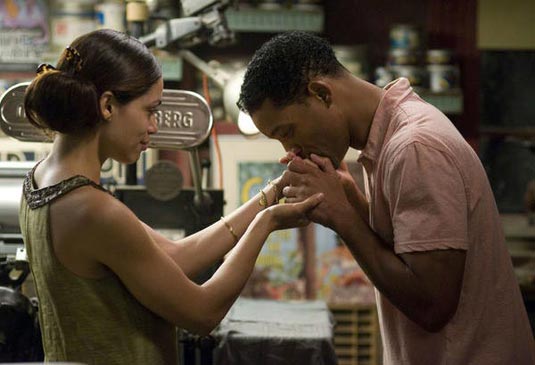 In Los Angeles, a distressed Ben Thomas (Smith) rings 911 to report a suicide — his own. But before that opening bombshell can be properly addressed, the film rewinds to elucidate the goings-on that led to that fateful call, which are initially depicted without context in order to generate intrigue. Ben visits a nursing home administrator with a bone marrow disease to ask him strange questions, then spies on a hospital-bound beauty named Emily Posa (Rosario Dawson) who’s suffering from congenital heart failure, and also harasses a blind telemarketer (Woody Harrelson) over the phone. Having found and selected these strangers through his job at the IRS, Ben stages his encounters as tests aimed at uncovering whether his subjects are “good people” who deserve an undisclosed gift he has to offer…full story [Cinematical] There are movies out there that could do well in presenting the characters and the situations at hand without flashback scenes, but I’m glad this movie has those moments because they make us understand better and to a certain degree, it adds to the sadness that motivates an upcoming act of kindness. Original music by Angelo Mili does a good job in giving that soothing and calming comfort needed right before one decides to do something drastic…full story [Rama’s Screen] Is this a practical joke? Without spoiling anything, know that “Seven Pounds” is as monotone and manipulative as movies get, speaking almost completely in vague generalities (“I’ll make sure everything goes as planned”) to string you along until it decides to tell a story. Which it never really does. The script overflows with questionable emotional choices that insult concepts of life, death and love while refusing to analyze guilt and atonement–even stooping to imply that some people deserve to live more than others. Dawson’s performance is the lone bright spot in a film that’s a lie and a tease, and boasts possibly the most ridiculous death scene you’ve seen this decade…full story [MetroMix] 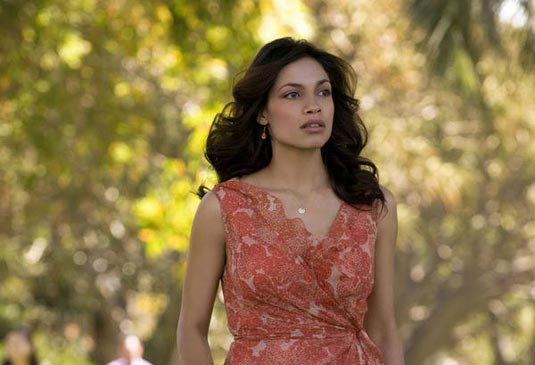 I am reminded of a film you should see some day, Melville’s “Le Samourai,” about a man who lies on a bed in a dark hotel room and smokes, and gets up, and pays meticulous attention to his appearance, and goes out into the night, and we have no idea who this man is. I find this more interesting than a movie about a man whose nature and objectives are made clear in the first five minutes, in a plot that simply points him straight ahead. Will Smith displays a rather impressive range of emotional speeds here. He can be a tough, merciless IRS man. He can bend the rules on some cases. He can have a candlelight dinner with a beautiful woman named Emily Posa (Rosario Dawson) and go home afterward. She can sense his deep sadness. He is angry with people sometimes, but he seems angriest of all at himself. It’s quite a performance…full story [Chicago Sun Times] Without divulging the movie’s central secret, “Seven Pounds” wants to open thought-provoking questions about life and death, personal responsibility and personal sacrifice. But in execution, the questions answer themselves — always in the affirmative — because we’re accustomed to believe Will Smith, a movie star whose screen appeal is based on his sincerity, is always doing the right thing. Is Smith’s character doing the right thing? The audience never gets a chance to ask, because Muccino’s glossy but opaque direction withholds the crucial information we would need to judge Thomas’ actions for ourselves. When it comes to having the courage to trust the audience, Muccino proves he’s as spineless as a jellyfish…full story [The Salt Lake Tribune]
Continue Reading
Advertisement
You may also like...
Related Topics:Rosario Dawson, Seven Pounds, Will Smith, Woody Harrelson