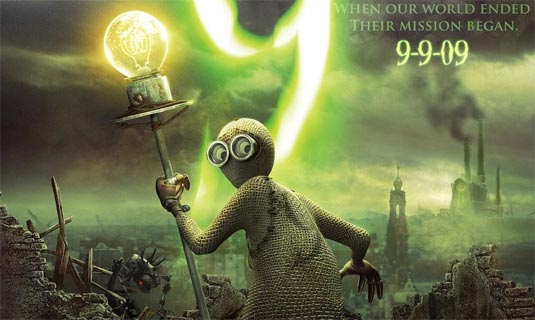 Focus Features debuted the official poster for Shane Acker‘s animated fantasy epic movie “9“. The film featuring the voices of Elijah Wood, John C. Reilly, Jennifer Connelly, Crispin Glover, Christopher Plummer, and Martin Landau. Synopsis: When 9 (Elijah Wood) first comes to life, he finds himself in a post-apocalyptic world. All humans are gone, and it is only by chance that he discovers a small community of others like him taking refuge from fearsome machines that roam the earth intent on their extinction. Despite being the neophyte of the group, 9 convinces the others that hiding will do them no good. They must take the offensive if they are to survive, and they must discover why the machines want to destroy them in the first place. As they’ll soon come to learn, the very future of civilization may depend on them. “9” is produced by Tim Burton (The Nightmare Before Christmas) and Timur Bekmambetov (Wanted), screenplay was co-written by Shane Acker and Pamela Pettler (Corpse Bride, Monster House). “9” arrives in the movie theaters September 9th, 2009.