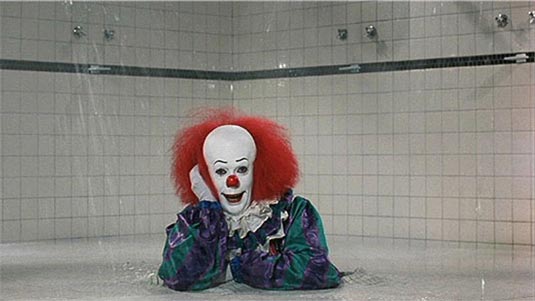 The adaptation of Stephen King’s It is going to the big screen, thanks to director Cary Fukunaga (Jane Eyre), who is also co-writing the script with Chase Palmer. Knowing the fact that his books are approximately 1000 pages worth (give or take few hundred) and can also serve as a throwing weapon (1000 pages can be quite HEAVY, you know), It is going to be divided into two movies, having 1,104 pages on which the plot centers on a group of loser kids who band together to defeat a mysterious creature who preys on children.  Thinking themselves safe as adults, It comes back to test their guts once again. The previous version was released on TV in 1990, and though I love Tim Curry, this clown was quite… well it was pissing me off, even as a kid. It was understandable to me that he would appear to each kid as a projection of what they are scared of most, but still. It only made me don’t like clowns (not hate, just don’t like – there is a difference between the levels of those two), not necessarily be scared of them. The rest of the stars of that three-hour movie were John Ritter, Jonathan Brandis, Seth Green, Harry Anderson, Annette O’Toole and Richard Thomas. It will be interesting to see how Fukunaga handles the visuals and will it be divided into a part for kids and a part for adults, or will he blend them. The book description is as follows (via Amazon):

They were just kids when they stumbled upon the horror within their hometown. Now, as adults, none of them can withstand the force that has drawn them all back to Derry, Maine, to face the nightmare without end, and the evil without a name…”

THE EXPENDABLES, RED and STEP UP Being Eyed For Potential TV Series
New MAN OF STEEL Teaser Poster
Advertisement