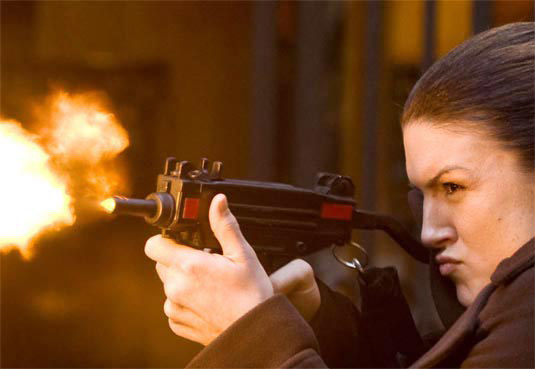 Haywire is definitely familiar project to you all, so we should get straight to the point with this one. We finally have the official trailer for Steven Soderbergh‘s upcoming movie which has great cast on board! If you expect to see a looot of action, then you came to the right place, although, let me just tell you that first 25 seconds of this clip definitely looks like that Beyonce feat Lady Gaga video for Telephone. So, don’t get confused, the fun starts at 0:28! So, as we previously reported, Haywire is Soderbergh’s dynamic action-thriller that follows “Mallory Kane, a highly trained operative who works for a government security contractor in the dirtiest, most dangerous corners of the world. After successfully freeing a Chinese journalist held hostage, she is double crossed and left for dead by someone close to her in her own agency. Suddenly the target of skilled assassins who know her every move, Mallory must find the truth in order to stay alive. Using her black-ops military training, she devises an ingenious – and dangerous – trap. But when things go haywire, Mallory realizes she’ll be killed in the blink of an eye unless she finds a way to turn the tables on her ruthless adversary.” Movie stars Channing Tatum, Ewan McGregor, Michael Fassbender , Antonio Banderas, Bill Paxton, Michael Douglas, Michael Angarano and introduces mixed martial arts superstar Gina Carano as Mallory Kane, in a demanding lead role that has her performing her own high-adrenaline stunts. Haywire will hit the theaters January 20, 2012. Let us know what you think about the trailer, and of course – stay tuned! [youtube]http://www.youtube.com/watch?v=KFV0Uvzpz0o[/youtube] Haywire Trailer
Continue Reading
Advertisement
You may also like...
Related Topics:Antonio Banderas, Channing Tatum, Ewan McGregor, Gina Carano, Haywire, Michael Angarano, Michael Douglas, Michael Fassbender, Steven Soderbergh