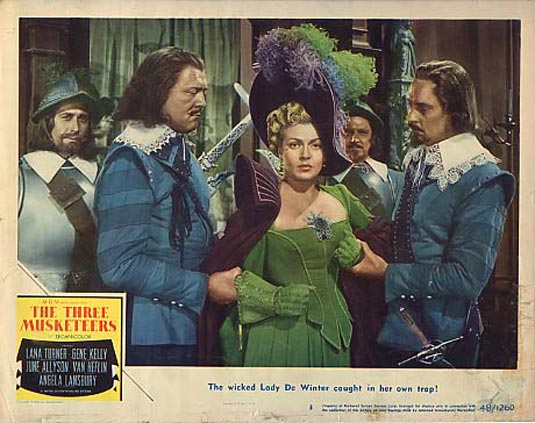 I was wondering for quite a while now, what is it with all the remakes and recycled stories, given that barely anything new has come out from Hollywood’s ‘oven’ recently (and not-so-recently). Example – and one that I personally could think of easily – after the original one (speaking about Hollywood – there are even older versions, UK from 1909 or Italian/UK from 1913, for example) in 1914 (a comedy with Earl Talbot), The Three Musketeers has had its number of remakes: the one from 1921 with Douglas Fairbanks (correct me if I’m wrong but I think it was the first one with sound), the one from 1939 with The Ritz Brothers, the one from 1948 (personal favourite, from the ‘Golden Age of Hollywood’) with Gene Kelly and Lana Turner (and magnificent Vincent Price), two TV versions from 1969 and 1973, then the one with Oliver Reed, Raquel Welch, Richard Chamberlain and Michael York from 1973 as well, the one from 1993 with Kiefer Sutherland and Charlie Sheen… Oh and the latest one from 2011, with Orlando Bloom (why he didn’t get one of the lead roles is beyond me), Matthew Macfayden and Milla Jovovich… sheesh! I grew tired even for mentioning those, and there are 29 results on IMDb! I will only mention some of the others – Anna Karenina, Romeo and Juliet (and whole bunch of other adapted Shakespear’s plays), Zorro, Dracula… “The Guinness Book of Film Facts and Feats” apppoints Cinderella as the most-filmed and re-filmed story, while some other cinephiles think it is A Christmas Carol (or Scrooge). What actually gave me a push to write this (reminded me of my ponderings) was an article I came across while surfing the Internet an hour or two ago (in search for the latest news to satiate your hunger:)), written by Mr Tim Walker. Why? Well, because he practically told my thoughts in his words. So what is it about remakes that makes them so appealing to film-makers? Bobette Buster explains in that article that “studios are neglecting one of the most important – and cheapest – parts of the filmmaking process: development. “I see it on screen over and over again,” she says. “People who have a good idea but become frustrated with the story development process and eventually just say: ‘It’s good enough’. They think they can fix the problems later with marketing. Pixar is an exception: it takes apart its stories at least four or five times before putting them out and it takes the time to create a great tale, well told.”

And truth be told, I can think of quite a few remakes where even the already- chewed-up-story wasn’t enough, not even for a watchable movie – hate me all you want, but I was SHOCKED AND APALLED when I’d heard that the Clash of the Titans got a friggin’ sequel – still am (Mr Neeson, I love your acting and I hate to say it, but what were you thinking, taking part in it?)! Not only they did a ‘remake’, but they also changed the entire mythos to suit their need to ‘differ from the original’ or whatever the need was, which is another one of the ‘trends’ in Hollywood – actually THAT is the only (remotely) creative thing along with the CGI – we don’t like how that part of the history/mythology we’re trying to film played out, let’s change it! Let me tell you something: if you have no creativity to think of a new story, at least have a decency to CHANGE FRIGGIN’ NAMES along with the facts – that way it will at least remind of creativity. After all this rant, it is only left for me to give you the link to this excellent article, which completely conveys my thoughts through a thought-provoking interview with Ms Buster, and one about the ‘Golden Age of Hollywood‘, in case you wanted to know more. I hope you’ll find them enjoyable as much as I did.
Continue Reading
Advertisement
You may also like...
Related Topics:A Christmas Carol, anna karenina, Charlie Sheen, Cinderella, Clash Of The Titans, Dracula, Kiefer Sutherland, Milla Jovovich, Orlando Bloom, Romeo and Juliet, The Three Musketeers