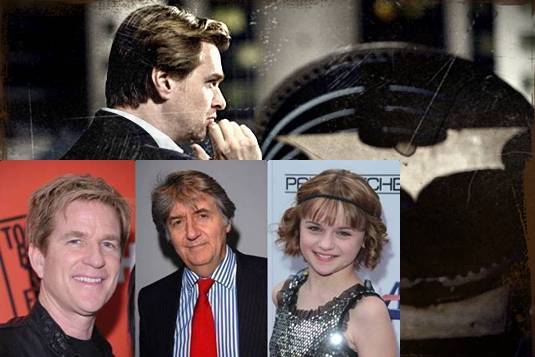 After the first official look at Tom Hardy as Bane three more thespians have now joined the film’s cast. Modine will be playing a character named Nixon that was essentially invented by Nolan. There is still no word on what character elder Conti and much younger King will play. We can only speculate that King is playing a slightly older version of Jim Gordan’s daughter Barbara.

As you probably know the start of production on the superhero pic was recently announced which  is slated for release on July 20, 2012 and will film in Pittsburgh, New York and Los Angeles, plus on location in India, England and Scotland.

Modine will be seen playing the role of a former Merrill Lynch CEO John Thain in Curtis Hanson’s HBO telepic Too Big to Fail. He’ll also crop up alongside Eva Mendes in Patricia Riggen’s See If I Care, and in the indie Family Weekend, opposite 11-year old King.

Conti recently appeared in Julie Taymor’s The Tempest, alongside Helen Mirren and Felicity Jones and will next be seen in Marios Hamboulides comedy Rekindle.

We’ll have to wait until an early image of Anne Hathaway in her close-fitting Catwoman costume is released for the Internet. That’s it!