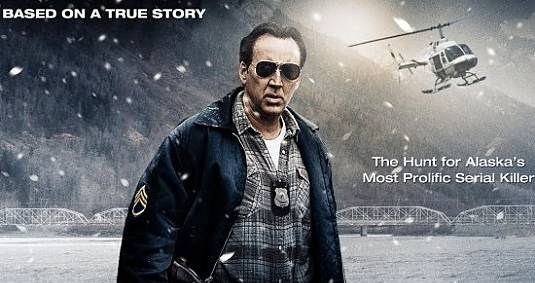 The hunter becomes the hunted – that’s what Scott Walker‘s latest flick The Frozen Ground is all about! In other words: we have one detective, one psychopath and one hooker. Man, this sounds awful! Let me put it this way: one detective and one hooker will team up to hunt the psychopath. Better?

Written and directed by Scott Walker, (and based on a true story), the movie revolves around Alaskan detective Glenn Flothe, played by Nicolas Cage, as he sets out to end the murderous rampage of a serial killer named Robert Hansen (and played by John Cusack), who has gone unnoticed for 13 years… Trailer removed by studio request Here’s the rest of the story:

As the bodies of street girls start to add up in Anchorage, fear strikes a chord with the public. Risking his life, Detective Flothe goes on a personal manhunt to find the killer before the next body surfaces. When a seventeen year old escapee reveals key information about the case, Flothe is finally able to trail the killer. But will he catch him in time to save the next victim?

Beside Cage and Cusack, The Frozen Ground cast also includes Vanessa Hudgens as the above mentioned hooker named Cindy, 50 Cent, Radha Mitchell, Dean Norris, Kevin Dunn and Kurt Fuller. Click on all these images and poster to take a better look & bookmark somewhere: The Frozen Ground arrives in theaters on August 23rd, 2013.