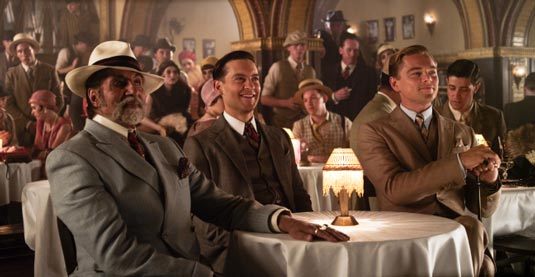 If you ask anyone even a bit familiar with contemporary American literature what the great american novel is, you are 100% sure to hear the name The Great Gatsby. Probably unanimously. This Frank Scott Fitzgerald‘s masterpiece, first published in 1924, ingeniously captured the spirit of the country in the ’20s, as well as the timeless bliss and tragedy of the American Dream.

Thus it will not be an exaggeration to say that this new adaptation (or remake, if you will) by Australian director Baz Luhrmann has a lot to live up to. To remind you, the 1974’s movie had Robert Redford, Mia Farrow and Bruce Dern as stars, and the movie has reached the ‘anthology status’.

In the latest one, cast is quite matchable: Leonardo DiCaprio as the title character Jay Gatsby, Tobey Maguire as the narrator, writer Nick Carraway, Carey Mulligan as Gatsby’s love interest Daisy Buchanan, Joel Edgerton as her brutish ‘hubbie’ Tom, Isla Fisher as his mistress Myrtle and a new hope, Elizabeth Debicki as Daisy’s friend, Jordan.

We got our hands on the first trailer, so take a look!

From the uniquely imaginative mind of writer/producer/director Baz Luhrmann comes the new big screen adaptation of F. Scott Fitzgerald’s novel, The Great Gatsby. The filmmaker will create his own distinctive visual interpretation of the classic story, bringing the period to life in a way that has never been seen before, in a film starring Leonardo DiCaprio in the title role. “The Great Gatsby” follows Fitzgerald-like, would-be writer Nick Carraway as he leaves the Midwest and comes to New York City in the spring of 1922, an era of loosening morals, glittering jazz and bootleg kings. Chasing his own American Dream, Nick lands next door to a mysterious, party-giving millionaire, Jay Gatsby, and across the bay from his cousin, Daisy, and her philandering, blue-blooded husband, Tom Buchanan. It is thus that Nick is drawn into the captivating world of the super-rich, their illusions, loves and deceits. As Nick bears witness, within and without the world he inhabits, he pens a tale of impossible love, incorruptible dreams and high-octane tragedy, and holds a mirror to our own modern times and struggles.