Connect with us
Sony Pictures UK has released an international trailer for Michel Gondry-directed The Green Hornet. Check it out below. 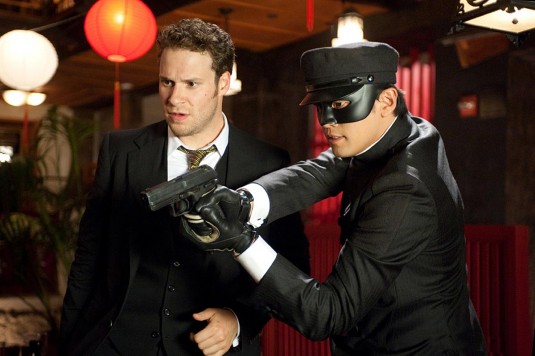 The Green Hornet In the film, Britt Reid (Seth Rogen), son and heir to Los Angeles’ largest newspaper fortune, is a rich, spoiled playboy who has been happy to maintain a direction-less existence. When his father James Reid (Tom Wilkinson) mysteriously dies, Britt meets an impressive and resourceful company employee, Kato (Jay Chou). They realize that they have the resources to do something worthwhile with their lives and finally step out of James Reid’s shadow. Kato builds the ultimate weapon, The Black Beauty, an indestructible car with every weapon and gadget imaginable and Britt decides that in order to be heroes, they will pose as villains. With the help of Britt’s new secretary, Lenore Case (Cameron Diaz), they learn that the chief criminal in the city is named Benjamin Chudnofsky (Christoph Waltz). He has united all the gangs under his power, and he quickly sees that the Green Hornet is a direct threat to the prosperous criminal underworld he controls. The movie also stars Edward Furlong, Edward James Olmos, Chad Colema, Sterling Cooper, Analeigh Tipton, David Harbour and Eddie Rouse. The film is directed by Gondry from the screenplay by Seth Rogen and Evan Goldberg, based upon The Green Hornet radio series created by George W. Trendle. The film is produced by Neal H. Moritz. Sony Pictures announced that The Green Hornet will be released in IMAX 3D, simultaneously with the 2D and 3D release of the movie on January 14th 2011.
Continue Reading
Advertisement
You may also like...
Related Topics:Cameron Diaz, Christoph Waltz, Jay Chou, Michel Gondry, Seth Rogen, The Green Hornet