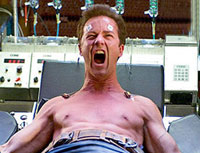 In the latest issue of Empire magazine, there are new shots from some of the upcoming comic book movies. One of those movies is “The Incredible Hulk“, which hasn’t given fans much to look at. While we still don’t get a shot of the green monster, there is a picture of Edward Norton as Bruce Banner and William Hurt as General Thaddeus “Thunderbolt” Ross.