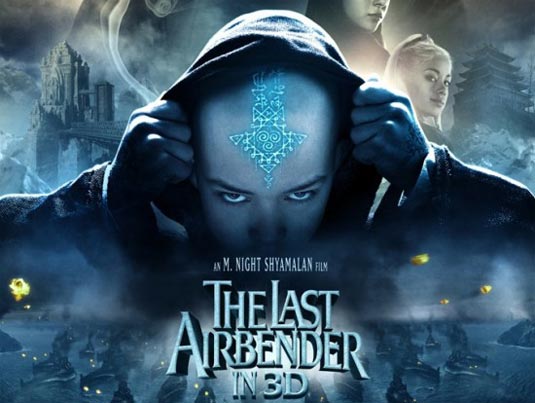 Paramount Pictures has released the final theatrical poster and international trailer for upcoming summer adventure The Last Airbender. M. Night Shyamalan‘s upcoming movie is based on the hugely successful Nickelodeon animated TV series, the live-action feature film is set in a world where human civilization is divided into four nations: Water, Earth, Air and Fire. The Fire Nation is waging a ruthless, oppressive war against the other three nations. The film’s hero, the reluctant young Aang (Noah Ringer), is the Last Airbender — the Avatar who, according to prophecy, has the ability to manipulate all of the elements and bring all the nations together. Aided by a protective teenage Waterbender named Katara (Nicola Peltz) and her bull-headed brother Sokka (Jackson Rathbone), Aang proceeds on a perilous journey to restore balance to their war-torn world. Dev Patel plays the Fire Nation’s evil prince Zuko. Exiled from the Fire Nation by his father, Zuko is sent to capture the Avatar in order to restore his honor and right to the throne. The Last Airbender opens July 2nd, 2010 in both traditional two-dimensional projectors, as well as in 3D.