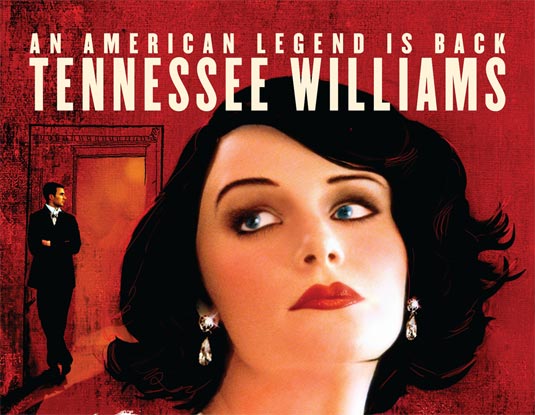 The poster and trailer for the upcoming drama “The Loss of a Teardrop Diamond” have appeared online. “The Loss of a Teardrop Diamond” is based on a recently rediscovered original screenplay by legendary writer Tennessee Williams (“A Streetcar Named Desire”, “Cat on a Hot Tin Roof”). Starring Bryce Dallas Howard and Chris Evans, the Paladin release will open in New York and Los Angeles in late December, with expansion to major markets following in early 2010. Academy Award-winner Ellen Burstyn, Academy Award-nominee Ann-Margret, Mamie Gummer, and Will Patton co-star in the film which was directed by award-winning short filmmaker and stage and screen actress Jodie Markell, in her feature debut. Widely considered the most important American playwright of the post-WWII, era, Williams wrote the  “Teardrop Diamond” screenplay at the height of his late-1950’s heyday, amid such classic plays, (which themselves were adapted into classic films), as “Cat on a Hot Tin Roof,” “Suddenly, Last Summer,” “Sweet Bird of Youth,” and “Orpheus Descending.” Set in the Roaring Twenties in Williams’ (and Markell’s) home town of Memphis, the film tells the story of Fisher Willow (Howard) a headstrong young heiress who chafes under the constraints of proper Southern society, and who rebels by asking the impoverished but handsome son of her father’s caretaker, Jimmy Dobyne (Evans), to escort her to the major social events of the season. The relationship is purely a business arrangement at the outset, with Fisher paying for Jimmy’s time and attention, but when she discovers that she really loves him, she finds it impossible to re-write the rules and earn the affection she tried to buy. Howard’s ability to evoke the dueling strength and fragility of this quintessential Williams heroine, along with her stunning mastery of his lush, poetic language, firmly establish her as one of the best actresses of her generation, and place her Fisher Willow in a pantheon of performances that includes Vivien Leigh’s Blanche DuBois, Elizabeth Taylor’s Maggie the Cat, Anna Magnani’s Serafina delle Rose, and Geraldine Page’s Alexandra Del Lago.

The Loss of a Teardrop Diamond Poster