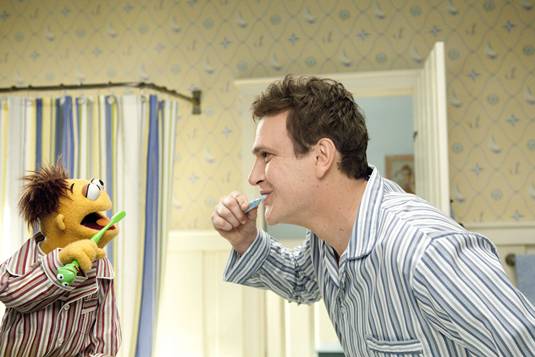 Nicholas Stoller, who is penning the sequel with The Muppets director James Bobin, assured Vulture that Walter is coming back. As you probably already know, Jason Segel’s character Gary won’t return for the sequel. Stoller said:

He is not making a cameo. He is heavily involved in the story.

At the premiere for the R-rated rom-com The Five-Year Engagement, which The Muppets co-writers Jason Segel and Nicholas Stoller are currently promoting, Stoller also said:

Walter is coming back. Come on, you saw the first one, right? The arc of the story was, ‘Am I a man or a Muppet?’ Gary chose ‘I am a man.’ So if you were making something called The Mannets, Gary would be in that. Walter chose to be a Muppet. He realized he’s a Muppet.

But it would be a smart move to shuffle him into the supporting players and put Kermit back in his place. Following this idea, Stoller won’t focus too heavily on the newest character:

It’s in the early stages, so everything could change, but right now it’s a Kermit-centric story, as a lot of the original movies were.

If the script comes together over the coming months, The Muppets 2 will come out during 2013, perhaps around the holiday season. Stay tuned. [youtube]http://www.youtube.com/watch?v=-WWWTW1P8rQ[/youtube]
Continue Reading
Advertisement
You may also like...
Related Topics:James Bobin, nicholas stoller, The Muppets