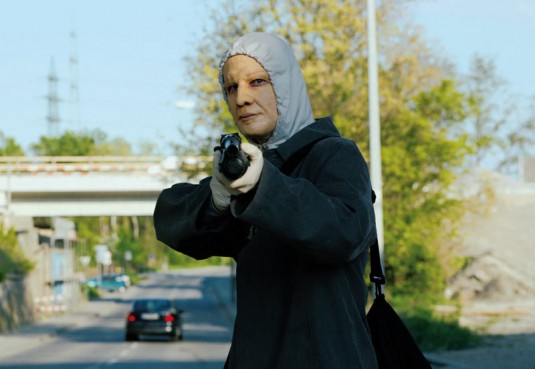 Trailer for Benjamin Heisenberg’s The Robber with subtitles has hit the web! I’m sure this already sounds familiar to you, and I’m sure you remember us writing about this project.

The Robber is Heisenberg’s 2010 film which tells the real-life story of marathon runner Johann Rettenberger, known as “Pump-gun Ronnie,” who made a hobby of robbing banks.

The movie premiered at the Berlin Film Festival is based on author Martin Prinz‘ source tome Der Räuber.

Sony bought the English-language remake rights to Austrian helmer Benjamin Heisenberg’s movie but in the meantime the original is getting a limited release in the US on April 29, 2011.

Check out the rest of this report for more story details.

“In the 1980s the bank-robber Johann Rettenberger was the most wanted criminal in Austria. Known as Pump-gun Ronnie because of the weapon he used and the Ronald Reagan mask he wore for his robberies, he sometimes robbed two or three banks on the same day.

He was also wanted for one murder, unconnected with the bank robberies. Unusually for a bank-robber, he was also a keen amateur marathon runner and had won several races. He jumped out of a window during questioning and escaped by running into the Vienna Woods.

It took four days and the biggest police operation in Austrian history before he was cornered and shot himself. On the Run is not an attempt to analyze or explain, much less excuse Rettenberger, nor is it a biographical novel recreating the details of his life in chronological order.

It is a novel about a man for whom running is of existential importance. He only seems to feel truly alive, truly himself, truly free when he is running. Although it does have the forward drive of the excitement of the chase, from the perspective of the quarry, it is more of an Austrian The Loneliness of the Long Distance Runner than a thriller.”

Continue Reading
Advertisement
You may also like...
Related Topics:The Robber