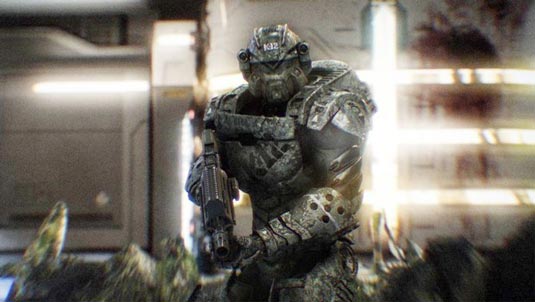 Shinji Aramaki‘s Starship Troopers: Invasion is the new CG animated movie by Sony, and it will probably go straight to DVD/BluRay. Though I remember it as ‘trashy’ sci-fi, it will always have a special place in my heart, and I’m guessing that at least some of you geeks out there share my feelings, so this is for you. This time, we have more than just a glimpse at the ‘newborn’, and while the character details don’t look that impressive, the action is a whole new story, though it feels a little bit more as an unfinished cinematics from a game, than a completely animated film. You might still find some cool stuff in this movie, so take a peek: [youtube]http://youtu.be/nrlI1Hs_HIM[/youtube] Synopsis: “The story centers around two teams of Roughnecks: the Alpha 1 team embarking on a mission to rescue the distant outpost Fort Casey and the K-12 team already stationed at Fort Casey. The two war-depleted squads must band together with a common objective, but personalities and ambition ensure a bumpy ride.” As they announced on the production blog, we will be able to see the main characters from the first part, as well.  And just in case you’ve missed it, we will share also the first trailer, released back in March. Enjoy! [youtube]http://youtu.be/ObDxkBtBHso[/youtube] Starship Troopers: Invasion is directed by Japanese filmmaker Shinji Aramaki, (Appleseed and Appleseed: Ex Machina), as well as a Halo Legends segment. The script is written by Flint Dille (Dragonstrike), based on Robert A. Heinlein‘s novel (who is also co-writer), and this version is supposed to be more of a sequel to the original 1997 Starship Troopers movie than any of its sh*tty sequels so far. We don’t have much release info yet, so stay tuned!
Continue Reading
Advertisement
You may also like...
Related Topics:Shinji Aramaki