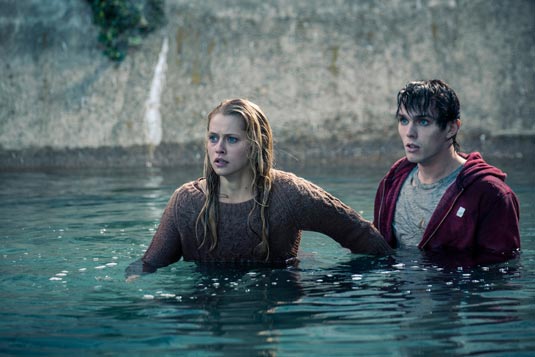 Summit Entertainment has released three clips from director Jonathan Levine’s upcoming zombie horror/romance film, Warm Bodies. It’s a comedy as well, so you know, zombies aren’t completely out to eat your brains. Except they are. And then they aren’t. Go figure. I guess it’ll all make sense in the movie. Maybe. I must admit that this looks as a no-brainer to me – pardon the pun – even for a COMEDY (if it is such); especially him, you know, being a rotting-flesh walking carrion while looking as a cover page model at the same time. I wonder if his breath stinks and if it did, how on Earth she isn’t bothered by it? Does she stuff him with tic-tacs? Oh and look at those completely clear, non-deadish blue eyes… A real mirror to his undead soul. Oh wait… nah, don’t mind me, don’t mind me at all if you’re intent on enjoying this movie. Two of the clips are new, but the third is just a truncated version of the 4-minute sneak peek clip that was released earlier. I’ve added that one instead. I mean, why watch just 1 minute of the mind-draining scene when you can watch 4 minutes, right? Anyway, have a look: Synopsis:

A funny new twist on a classic love story, Warm Bodies is a poignant tale about the power of human connection. After a zombie epidemic, R (a highly unusual zombie) encounters Julie (a human survivor), and rescues her from a zombie attack. Julie sees that R is different from the other zombies, and as the two form a special relationship in their struggle for survival, R becomes increasingly more human – setting off an exciting, romantic, and often comical chain of events that begins to transform the other zombies and maybe even the whole lifeless world.

Starring Nicholas Hoult, Teresa Palmer, Rob Corddry, Analeigh Tipton, John Malkovich (JOHN MALKOVICH?! Why, John, why? Short on money?), Lizzy Caplan, Dave Franco, Cory Hardrict and Justin Bradley, Warm Bodies are shuffling into theaters this February 1st, 2013. So tell me, are you looking forward to the zombie romance-reinvented film, or do you find it completely nonsensical?