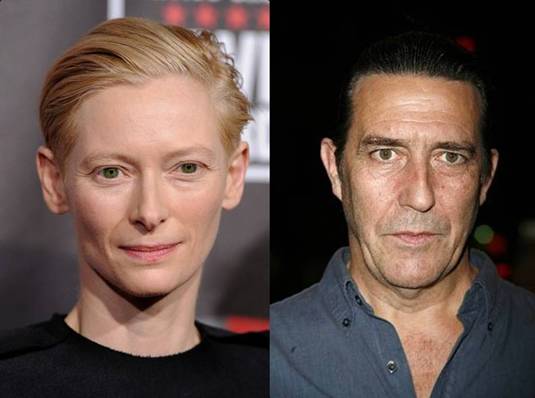 Swinton, a world-class actress and a front-runner for the Best Actress awards is currently promoting her new film titled We Need to Talk about Kevin at Cannes. It’s a great score for Cineman Films to attach Oscar winner to this project as  she has been already seen in Jim Jarmusch‘s untitled vampire film which will shoot in early 2012.

Sisters is set in 1960s West Belfast and tells the tale of a Irish mother, feminist, activist and nun who lands at a school and changes thousands of deprived kids’ lives around with her skills as a teacher.

Swinton will play an Irish nun.

With Colin Vaines (producer of Madonna’s W.E.) and Lisa Lambert (the exec producer of Festival de Cannes In Competition) on board, Terry Loane is looking at a fall start for the project.

Ciaran Hinds (There Will Be Blood, Life During Wartime) played the role of Albus Dumbledore’s brother Aberforth (replacing Jim McManus) in Harry Potter and the Deathly Hallows. He is well-known as stage actor and has also been featured in a number of made-for-television movies.

Check out trailer for Mickybo and Me, in which Terry Loane debuted as a feature film director and screenwriter – Ciarán Hinds starred as Jonjo’s Da. Mickybo & Me won Best Children’s Film at Tiburon International Film Festival.

In second, Tilda Swinton plays Eva in We Need to Talk about Kevin; she puts her ambitions and career aside to give birth to Kevin who later kills his classmates and teachers in a Columbine-like massacre.