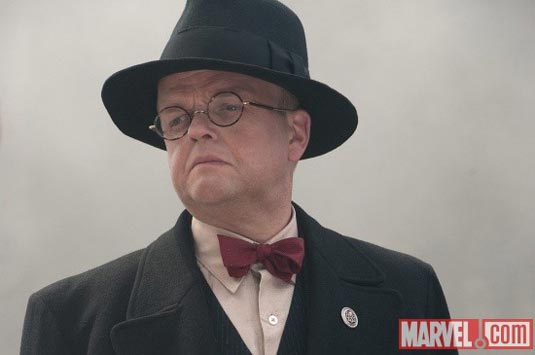 While it’s typical for film franchises to keep the same stars between sequels, the big time-jump between Captain America: The First Avenger and Captain America: The Winter Soldier makes retaining the cast a trickier venture. But thanks to the power of flashbacks and “comic book science”, it’s not an entirely impossible one. So far, Chris Evans and Sebastian Stan have been set to reprise their roles. Now, Toby Jones is joining them also. In a recent interview given to HeyUGuys.co.uk, the British actor confirmed that he’d be reprising the role of one of the villains, Arnim Zola:

he responded with a smile when asked whether he’d return for The Winter Soldier. Listen for yourself what else he had to say: In The First Avenger, Zola played a HYDRA scientist who worked with the Nazis (led by the Red Skull) to harness the powers of the Tesseract. He’s captured by the good guys at some point, though Bucky (Stan) dies in the process, and gives away crucial information that allows Captain America to stop a devastating attack on America. The Winter Soldier picks up decades after The First Avenger, which raises the question of just how we’ll get to see Zola again. The most obvious possibility is that we’ll be seeing him in flashbacks. However, the character’s comic book history hints at another – stranger – potential arc. In the books, his experiments included a robot body into which he could transfer his consciousness. Could we be looking forward to the box-headed version of the character (and why does it remind me of Krang from TMNT)? Probably not, but it’s fun to ponder. Captain America: The Winter Soldier will be based on the celebrated Marvel Comics storyline of the same title. In addition to returning stars, Frank Grillo is on board to play Crossbones, while Anthony Mackie will play Falcon. Hayley Atwell is not returning as Peggy Carter, and a new female lead is currently being sought after. Anthony Russo and Joe Russo are directing the film, which opens on April 4th, 2013.
Continue Reading
Advertisement
You may also like...
Related Topics:Anthony Mackie, Anthony Russo, Captain America: The Winter Soldier, Chris Evans, Frank Grillo, hayley atwell, Joe Russo, Sebastian Stan, Toby Jones

Ron Howard Is Now On Board To Direct Disney’s Adaptation Of THE GRAVEYARD BOOK?
Arnold Schwarzenegger Confirmed for TERMINATOR 5
Advertisement