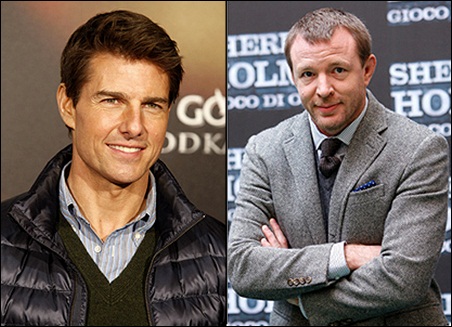 Tom Cruise likes to be kept busy as he’s already looking to his next project, the long-mooted big screen take on a classic 1960s espionage TV series,The Man From U.N.C.L.E. This spy thriller has been bubbling away for several years at Warner Bros., going through Matthew Vaughn, David Dobkin, and Steven Soderbergh before finally landing with Guy Ritchie in 2011. George Clooney was the first choice for the role of Napoleon Solo, but when the star went down with a back injury Soderbergh went through a wide array of potential replacements including Michael Fassbender, Joel Kinnaman, Johnny Depp, and Channing Tatum and none of them has stuck. Scott Z Burns has penned a screenplay for the movie. If Cruise agrees on this, the studio will continue to look for Illya Kuryakin, Solo’s blond Russian partner. Burns recently revealed that the take he had developed with Soderbergh would ‘take U.N.C.L.E. back to its roots’ and center on the 1966 Palomares B-52 crash, but it’s unclear how much has changed since then. In addition to the Mission: Impossible series and the Jack Reacher movies, The Man From U.N.C.L.E. has the potential to give Cruise another major studio franchise. He will next be seen in Joseph Kosinski’s Oblivion, due out next month, and Doug Liman’s All You Need is Kill, due out in March of next year. [youtube]http://www.youtube.com/watch?v=CjmOkqU6Roo[/youtube]
Continue Reading
Advertisement
You may also like...
Related Topics:Channing Tatum, David Dobkin, Doug Liman, George Clooney, Guy Ritchie, Jack Reacher, Joel Kinnaman, Joseph Kosinski, Matthew Vaughn, Michael Fassbender, Steven Soderbergh, The Man from U.N.C.L.E.