“No, we’re not making that movie (a 1969 film adaptation starring John Wayne and directed by H. Hathaway, one and only film for which John Wayne won an Oscar). We’re making the book”

C. Portis’ novel (1968) is narrated in the first person by Mattie Ross (stars Hailee Steinfeld , just turned 14, it’s her major motion picture debut), churchgoing spinster renowned by a rare independence and strength of mind. She teams up with Cogburn to avenge the death of her father at the hands of Tom Chaney who is played by Josh Brolin. Well, it’s not a remake; it’s an adaptation of the novel. But, would that adaptation completely live up moviegoers expectations? Or it was anticipated to be a popular holiday release, especially after all the award nominations the film has received?

Whatever, True Grit is only the second time Coen Brothers (known for not repeating themselves) have adapted a story that is not their own for the screen. And it is a Western besides. So, this was the Coens’ obvious shot to recall the success of No Country for Old Men (a 2005 novel by Cormac McCarthy). Play with language, richly delivered by actors is remarkable. Dialogues highlight R. Deakins’ stylish photography. C. Burwell’s romantic score underscores disconnect of violence that comes without warning. All presented in a hyperactive reality manner we’ve come to expect from the Coen Brothers. Fat, drunk U.S. Marshall named Reuben “Rooster” will not recapture Wayne’s success to Bridges. Despite opinions that he was better than Wayne in the 1969 version and better than he was last year in his Best Actor-winning Crazy Heart. On the other side Steinfeld is being pushed in the Supporting Actress category which is much more of race. But Hailee Steinfeld is absolutely great in this role. Maybe she is the one that has a true grit, aspired by Jeff Bridges at the end of this interview. Wish her luck! Click on the photo below to watch True Grit cast interviews: 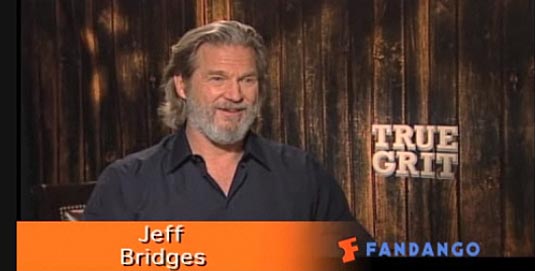 Shutter Island: Martin Scorsese Interview
Reminding of One of the Latest Tom Hooper Interview For he King’s Speech
Advertisement