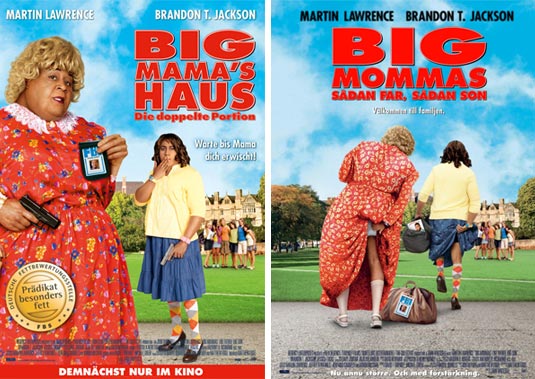 We have a trailer  for Big Momma’s House 3. And even more, we put up a couple of new international posters from the movie. These two come from Germany and show us a little more what we might expect from the third installment. Will it answer all the questions left open by the previous episode? Weather or not to trust, the “Big Momma’s House” sequels strictly follow the classic Hollywood trilogy structure. “Big Momma’s House” was an origin story, enlightening how Martin Lawrence first came to dress up like a chubby old lady. Then in “Big Momma’s House 2, ” things began to fall apart for Lawrence, as shown in the scene where he lost his job as a nanny for being unskilled and rather creepy. And now, four years later, comes the exciting end to this epic saga. Big Momma’s House 3 – or Big Mommas: Like Father, Like Sonto use its official title – is here. Martin Lawrence is still a tough FBI agent who’ll pull out all the breaks to catch his man, provided that by “pull out all the stops” you mean

Dress up as an obese female pensioner and dance around in a funny way even though it isn’t immediately helpful to his investigation.”

Big Momma 3 is directed by John Whitesell and has a cast which includes Martin Lawrence, Brandon T. Jackson, Jessica Lucas, Faizon Love, Sherri Shepherd and Ken Jeong. Not to forget, “Big Mommas: Like Father, Like Son” hits cinemas February 18th 2011. Let’s take a look at the trailer and find out … [youtube]http://www.youtube.com/watch?v=Clm8dsZjdoM[/youtube]