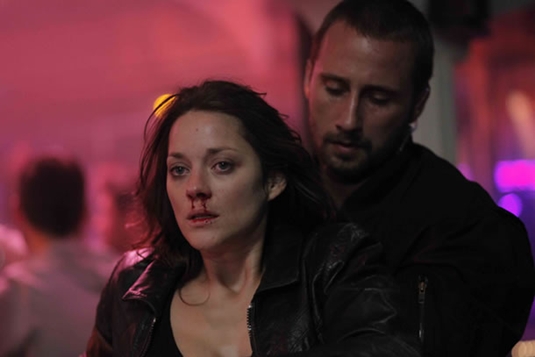 Let’s continue with our little chat about Jacques Audiard‘s upcoming Rust & Bone movie, which will compete for Palme d’Or at this year’s Cannes Film Festival. I’m sure you already remember our previous reports where we shared some great images of Marion Cotillard and Matthias Schoenaerts who star as the leads, and today it’s time for two great clips! Check it out… Both clips are quite intense, and give us a better look at Cotillard and Schoenaerts. But the central thing of these clips are Ali’s fights, which is logical, since we already know that Schoenaerts stars as a 25-year-old man who does odd jobs: night watchman, bouncer. The first clip looks great to me, probably because we have a good look at a nightclub where Ali actually meets Stéphanie, 28 years old orca trainer at the Aquatic Park in Antibes. As for the rest of the story – a real drama begins when Stéphanie loses both her legs during the orca presentation show. Ali soon finds her packed in a wheelchair, alone in her new special needs apartment and between them will soon grow a relationship that is special, carnal and codified. And when Ali participates in illegal fights to save her life, she will become his manager. Rust & Bone co-stars Bouli Lanners and Céline Sallette, and the film will be competing for the Palme d’Or at this year’s Cannes which runs from May 16-27. Let us know what you think about the clips, and stay tuned for more!
Continue Reading
Advertisement
You may also like...
Related Topics:Jacques Audiard, Marion Cotillard, Matthias Schoenaerts, Rust and Bone