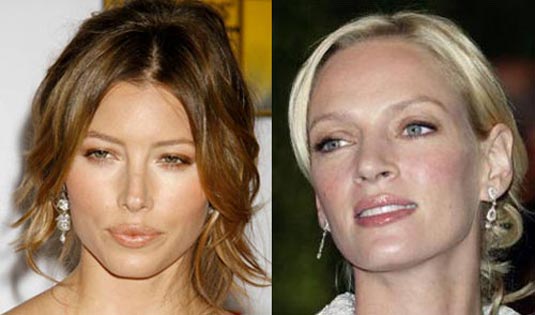 Gerard Butler is one lucky man! The actor is set to star in the upcoming soccer comedy Playing For Keeps, and we just learned that he’ll have quite interesting (and beautiful, by the way) company, because Uma Thurman and Jessica Biel have joined the project as well! Gabriele Muccino is in charge for directing the comedy, and for the rest of details, check out the rest of this report. So, we knew that Butler was set to star as “a former pro soccer player who finds himself dodging romantic advances from soccer moms after he agrees to coach his son’s youth team in an attempt to bond with the boy.” And, now the ladies! Biel will play Butler’s ex-wife, while Thurman will play a fellow parent (you should read that as one of the soccer moms trying to seduce Butler). As we said, Muccino will direct Playing The Field from a script by Robbie Fox (So I Married An Axe Murderer). Butler is producing with his Evil Twins partner Alan Siegel as well as Jonathan Mostow, Kevin Misher and Heidi Jo Markel. Nu Image/Millennium’s Avi Lerner, Danny Dimbort and Trevor Short are exec producing the pic. Playing For Keeps is scheduled to start production next month.
Continue Reading
Advertisement
You may also like...
Related Topics:Gabriele Muccino, Gerard Butler, Jessica Biel, Playing the Field, Uma Thurman