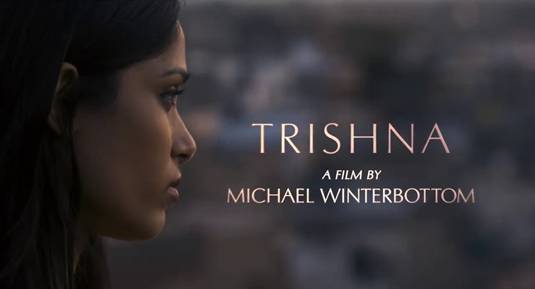 A brand new theatrical trailer of Trishna for the US audience has been released showing off the tougher dramatic undercurrent running through it and giving us a deeper look at the relationship between Trishna, the eldest daughter who works in a nearby resort to help pay the bills and Jay, the wealthy son of a property developer. A modern re-telling of Thomas Hardy’s novel ‘Tess of the D’Urbervilles’ and directed by acclaimed Michael Winterbottom (A Mighty Heart) looks to be set in the mold of the filmmaking well of inspiration which always seems to run back deep; transported to Rajasthan, India, follows the tragic romance between the lower class daughter and the upper class son. Jay (Four Lions star Riz Ahmed) finds every opportunity to win Trishna’s (Slumdog Millionaire star Freida Pinto) affection and she accepts his efforts with shy curiosity, but when the two move to Mumbai and become a couple, Jay’s deep family bond threatens the young lovers’ bliss. The film that looks gorgeous and sounds great, but with mixed reviews thus far, opens in limited release on July 13th, 2012. Check out the trailer. [youtube]http://www.youtube.com/watch?v=dlfZokfnY60[/youtube]
Continue Reading
Advertisement
You may also like...
Related Topics:Freida Pinto, Michael Winterbottom, Riz Ahmed, Trishna