Uwe Boll‘s movie “Far Cry“, based on a popular video game, is being released in September. We have poster some production photos and trailer. In a mysterious forest, a group of mercenaries are attacked. A scientist, Dr. Krieger, watches this from a secret research facility, obviously pleased with the results of his work. In Seattle, a veteran newspaper editor makes arrangements to send his two archrival reporters, Tom Moore and Valerie Constantine, to check out the mysterious reports coming from an island in the Pacific Northwest. Once on the island, it doesn’t take long for the duo and their Captain, Jack Carver (Til Schweiger – “The Red Baron”, “Already Dead”), to find trouble. Mercenary commander Maria Sanchez immediately tries to capture them. Valerie and Jack manage to escape but Tom is killed. The mercenaries are hot on their heels and Valerie and Jack argue about their plan. Jack wants to get off the island as quickly as possible by reaching his friend Emilio. Valerie, a seasoned reporter, wants to gather more evidence for her story. 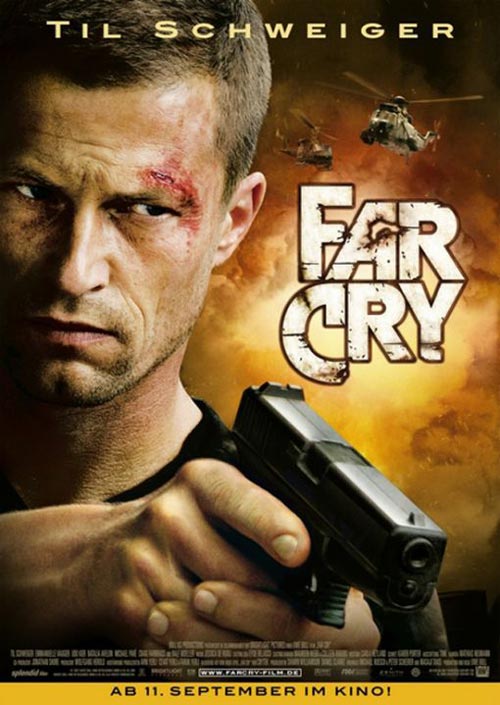 “Far Cry” Poster
After several dramatic chases and an encounter with the strange creatures, Valerie, Jack and Emilio are captured and brought to Kreiger. Krieger wants Valerie to join him in reporting his accomplishments to the world. Meanwhile, in the lab, the creature escapes and tries to kill Jack. Jack and Emilio manage to elude the creature but others in the compound are not as lucky. The creature corners Valerie and she narrowly escapes death as Emilio and Jack reach her just in time. The loss of control sends Sanchez into a fury. Jack and Valerie are pursued by Sanchez as they make a frantic attempt to get off the island and alert the world.