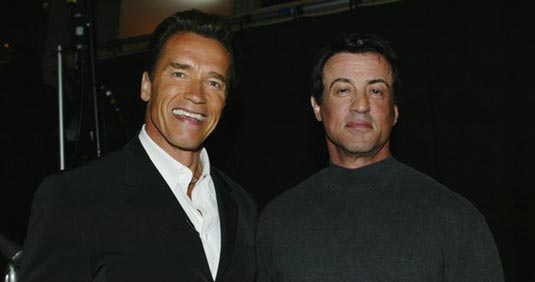 Well well, after thirty years of competition between two greatest Hollywood muscle-packed bad-asses, Arnold Schwarzenegger and Sylvester Stallone, now you practically can’t see one without another in them action movies. After testosteron-packed The Expendables and its sequel being released this summer, they are working on another genre movie together – The Tomb. Hit the jump for more.During a recent interview with ET on the Tomb set, Stallone spoke out about his desire to keep Hollywood’s old-school approach to action filmmaking alive: “This genre unfortunately is becoming… let’s just say it’s fading away. You have the superheroes today which are possessed with all extraordinary powers; they can blink and a fireball comes out of there. It’s great. And then you have a bunch of us which is just your basic male-pattern badness. … Kind of like hands-on action.”

As to question about why it’s taken more than three decades for Sly and Arnie to join forces onscreen, Sly said: “I think in the beginning we were competitive — there’s no question about it. A little alpha territorial. And then we realized it was good for our careers [to work together].”

Schwarzenegger agreed as much, during his own interview with ET: “The funny thing is we have tried, I think, our entire careers to always work together. We have talked about it for three decades and it never happened. I think we tried maybe too hard. … But now after the governorship, somehow this just fell into place.”

Official synopsis: “After being framed by persons unknown, all of Breslin’s ingenuity and expertise are about to be put to work in the most challenging test he’s ever faced: escaping from a high-tech prison facility that’s design is based on his own protocols. Arnold Schwarzenegger plays Emil Rottmayer, a complex inmate with multiple shades of gray.”

Here’s the entire interview given to ET: [youtube]http://www.youtube.com/watch?v=G0VTez0iF7g[/youtube] Directed by Mikael Håfström and written by Miles Chapman and Jason Keller, The Tomb is slated for a 2013 release. Keep checking us out for updates.
Continue Reading
Advertisement
You may also like...
Related Topics:Arnold Schwarzenegger, Jason Keller, Mikael Hafstrom, Sylvester Stallone, The Expendables, The Expendables 2, The Tomb