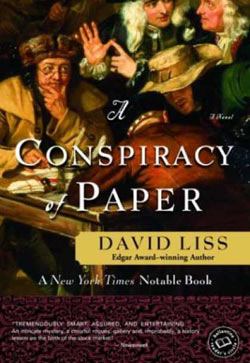 Latest news from Hollywood goes like this: Warner Bros. has optioned the David Liss novel A Conspiracy of Paper for producers Ridley Scott and Tony Scott. Danny Strong will adapt the novel for the studio and Scott Free Films. Published in 2000, the novel is a mystery period tale set in London leading up to the bursting of the South Sea Bubble in 1720. Or, if you prefer a little detailed description: “Benjamin Weaver is an outsider in eighteenth-century London: A Jew among Christians; a ruffian among aristocrats; a retired pugilist who, hired by London’s gentry, travels through the criminal underworld in pursuit of debtors and thieves. In A Conspiracy of Paper, Weaver becomes entangled with a crime of the most personal sort, involving the mysterious death of his estranged father, a notorious stock-jobber. To find the answers he seeks, Weaver must contend with a garrulous prostitute who knows too much about his past, estranged relatives who remind him of his alienation from the Jewish faith, and a cabal of powerful men in the world of British finance who have disguised their business dealings with an intricate web of deception and violence. The more Weaver discovers, the darker the truth becomes, until he realizes that he is following too closely in his father’s footsteps-and they just might lead to his own grave. Relying on brains and brawn, Weaver uncovers the beginnings of a strange new economic order based on stock speculation – a way of life that poses great risks for investors, but real dangers for Weaver and his family. An enthralling historical thriller, A Conspiracy of Paper will leave readers wondering just how much has changed in the stock market in the last three hundred years…” We’ll keep an eye on A Conspiracy of Paper, make sure you stay tuned for more updates!
Continue Reading
Advertisement
You may also like...
Related Topics:Ridley Scott, Tony Scott