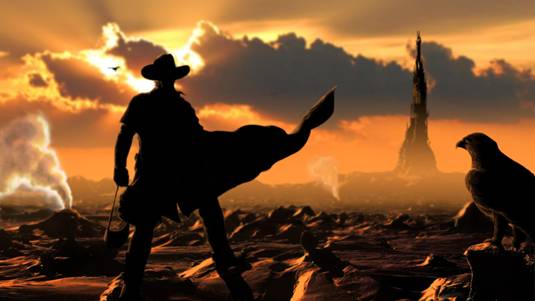 There’s not much to say. However, this subject deserves to be considered, but first a bit of backstory. After Universal said ‘no’ to Ron Howard’s script last summer, which would have led to three movies and two television series, with Javier Bardem lined up to star, screenwriter Akiva Goldsman and producer Brian Grazer toyed with an idea of turning Stephen King’s The Dark Tower into a TV series and made significant budget cuts to allow the project to get made. It was up to Howard and Grazer to find a home for the post-apocalyptic feature. Given that HBO and Warner Bros fall under Time Warner’s umbrella it looks like project finally has some legs. Furthermore, Bardem, who is currently shooting the new James Bond film, Skyfall was said to have landed the role of the Gunslinger with  Goldsman and Mark Verheiden sharing writing duties. Here’s the synopsis:

In the story, Roland Deschain is the last living member of a knightly order known asgunslingers and the last of the line of “Arthur Eld”, his world’s analogue of King Arthur. The world he lives in is quite different from our own, yet it bears striking similarities to it. Politically organized along the lines of a feudal society, it shares technological and social characteristics with the American Old West but is also magical. While the magical aspects are largely gone from Mid-World, some vestiges of them remain, along with the relics of a highly advanced, but long vanished, society. Roland’s quest is to find the Dark Tower, a fabled building said to be the nexus of all universes. Roland’s world is said to have “moved on”, and indeed it appears to be coming apart at the seams as mighty nations have been torn apart by war, entire cities and regions vanish without a trace and time does not flow in an orderly fashion. Even the Sun sometimes rises in the north and sets in the east. As the series opens, Roland’s motives, goals and age are unclear, though later installments shed light on these mysteries.