So, anyone remembers that creepy clown named Stitches, or what? In case you’ve missed our previous report, I will just remind you that I’m actually talking about one weird clown who comes back from the dead to haunt those who took his life during a fatal party mishap. Then, I will also add that today we have an official U.S. trailer for the whole thing. Don’t mess with this bad clown! Directed by Conor McMahon (who also co-wrote the script together with David O’ Brien) this horror-comedy stars popular British comedian Ross Noble as the above mentioned clown who… well, wants revenge, right? [youtube]http://www.youtube.com/watch?v=m7Q6JqZaiV0[/youtube]

Jaded Richard Grindle is the sleaziest clown working the children’s party circuit in Ireland. Arriving late to one birthday, his timing is off, the bratty kids a nightmare and a prank goes horribly wrong – he falls on a kitchen knife and goes to that Big Top in the sky. Years later the same nasty kids attend another more grown up bash. Little do they know, thanks to a black magic clown cult, Stitches will be the uninvited guest of honour seeking revenge on those responsible for his untimely death.

Beside Noble, Stitches also stars Tommy Knight and Gemma-Leah Devereux, and the movie is set to hit limited theaters on April 1st, 2013. Then, it will hit DVD/Blu-ray and VOD on April 2nd, 2013. So, any thoughts? 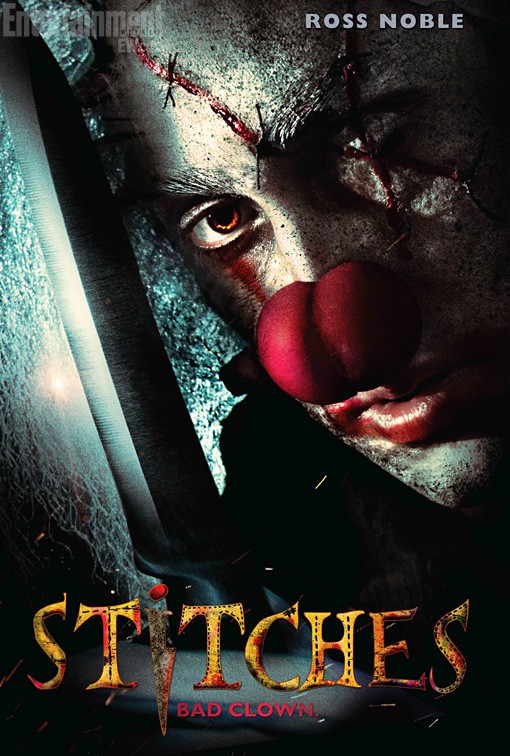 Continue Reading
Advertisement
You may also like...
Related Topics:Gemma-Leah Devereux