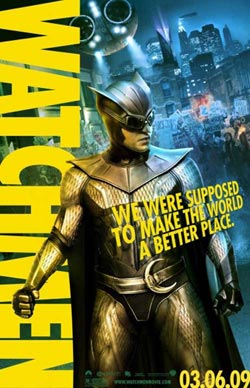 Director Zack Snyder has previously revealed that his upcoming “Watchmen” movie will be about 2 hours and 42 minutes long, but more edits could be made. According to Tuesday report on the Sci-Fire Wire, Snyder and his wife (and producer) Deborah told SCIFi.com Wire that the theatrical cut has now been shortened to two hours and thirty-five minutes.

“We’re getting really close,” producer Deborah Snyder said in a telephone interview on Nov. 18. “We’re at two hours and 35 minutes.”

“The movie’s pretty long … compared to 300, which was an hour and 58 minutes. The director’s cut [of Watchmen] is about three hours and 10 minutes long. It has even more than the theatrical version as far as the detail that gets even closer to the graphic novel.”

Rob Zombie Back for Halloween 2 ?
Johnny Depp to Star in “Hand of Dante”
Advertisement