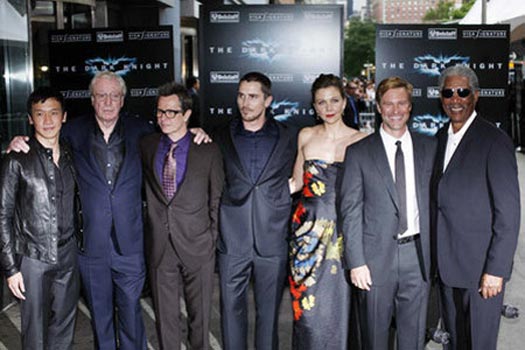 Batman movie “The Dark Knight” will make its U.S. debut in a record 4,366 theaters on Friday, which could push it past the 100 million U.S. dollar mark on its opening weekend, industry watchers said. Topping that blockbuster figure would push “Dark Knight” into rare air seen by only 10 other wide-release movies including “Spider-Man 3” and “Pirates of the Caribbean: Dead Man’s Chest.” Already, advance ticket sales have resulted in the sell-out of nearly 1,000 showtimes, online ticket seller Fandango said. Rick Butler, chief operating officer for Fandango said:

“It’s been a true phenomenon for us, we started to see interest as early as last year for this film”

Warner Bros., that is releasing “Dark Knight,” said it will debut in 4,366 theaters, edging out the record of 4,362 theaters set by “Pirates of the Caribbean: At World’s End” with its 2007 opening. That movie raked in about 115 million dollars on its debut weekend. “Dark Knight” will hope to beat the record debut of Sony Pictures Entertainment’s “Spider-Man 3” in 2007, which reached 151 million dollars. Sony Pictures is part of Japanese electronics company Sony Corp.

“Certainly a 100-plus million dollar opening weekend is in the cards,” said Paul Dergarabedian, who heads box office tracker Media by Numbers. “I cannot imagine a movie that has been more highly anticipated than this one, at least in recent memory.”

Generally speaking, fans and critics who have seen the film in advance are giving it rave reviews especially for the performance of Heath Ledger as the deranged villain, The Joker.
Continue Reading
Advertisement
You may also like...
Related Topics:Batman, The Dark Knight