So, yesterday we shared first (official) images from the upcoming The Hunger Games: Catching Fire, featuring Jennifer Lawrence‘s Katniss and Sam Claflin‘s Finnick. As you already see from our title – today we have five more images from the whole thing, and this time you’ll have even better look at Katniss and her friends: Josh Hutcherson as Peeta and Liam Hemsworth as Gale. We also have the first look at young Willow Shields and her Primrose, Donald Sutherland‘s President Snow & Woody Harrelson‘s Haymitch Abernathy. Check them all out in the rest of this report!

The movie begins as Katniss Everdeen has returned home safe after winning the 74th Annual Hunger Games along with fellow tribute Peeta Mellark. Winning means that they must turn around and leave their family and close friends, embarking on a “Victor’s Tour’ of the districts. Along the way Katniss senses that a rebellion is simmering, but the Capitol is still very much in control as President Snow prepares the 75th Annual Hunger Games (The Quarter Quell) – a competition that could change Panem forever.

As we previously reported, The Hunger Games: Catching Fire is already set to hit theaters on November 22nd, 2013. Click on the images (via EW) for a better look, and stay tuned for more updates! 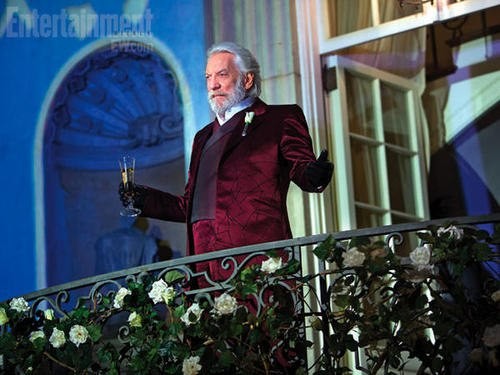