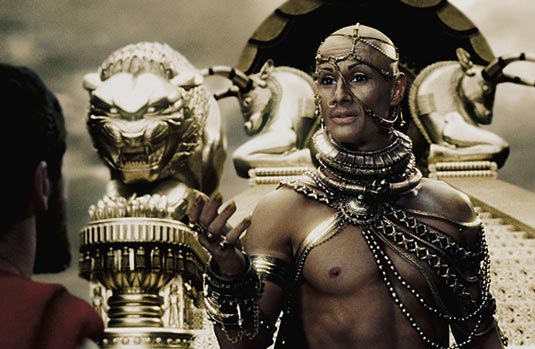 The 300 prequel has already had two names – Xerxes and 300: Battle of Artemisia, but now it seems that they have tumbled things around and the project once again has a new name: 300: Rise of an Empire. Over at IGN, you can see a little clip, featuring Eva Green saying a few words about her experience while portraying Artemisia. The plot of the story is set before the time Spartans battled with Persians at Thermopylae and will be based on the Battle of Artemisium. During the conflict, which was a naval battle, the different city-states of Greece teamed up to stop the oncoming Persian invasion. The movie will also cover the story of how Xerxes became the God-King of Persia. Stapleton will be playing the hero role of Themistocles; Green will portray Artemisia (a leader of the Persians); and Santoro is returning to reprise his role as Xerxes. Zack Snyder, who directed the first film, is serving as a producer on the new movie, as are Deborah Snyder, Bernie Goldmann, Mark Canton and Gianni Nunnari. Frank Miller wrote the story (which he is currently turning into a graphic novel, also) and the screenplay was written by Zack Snyder and Kurt Johnstad. The new film is being directed by Noam Murro, and is currently in production in Sofia, Bulgaria. Warner Bros. will be distributing the movie, and will be releasing it in theaters on August 2nd, 2013 also starring Lena Headey, Sullivan Stapleton and Rodrigo Santoro.
Continue Reading
Advertisement
You may also like...
Related Topics:300: Rise of an Empire, Eva Green, Frank Miller, Kurt Johnstad, Lena Headey, Mark Canton, Noam Murro, Rodrigo Santoro, Sullivan Stapleton, Zack Snyder