50 Cent has teamed up with boxer Floyd Mayweather to launch a new film. 50 Cent’s Cheetah Vision Films — co-founded with partner Randall Emmett (Setup) and the number two pound-for-pound boxer Floyd Mayweather,Jr. announced at the Sundance Film Festival last weekend that they’re joining on an action movie that will shoot in Grand Rapids in August. The rapper has probed into acting in recent years, with roles in Righteous Kill and Twelve, while he also runs a film company called Cheetah Vision. He is now having more control over movie industry by launching Mayweather Productions with the sportsman. They announced the news in Park City, Utah:

The movie will be titled Tomorrow Today.  Fif wrote the screenplay, and will direct it. The new production is a part of Cheetah Vision’s $200 million deal with Lionsgate. In 2010, 50 and producing partner Randall Emmett acquired a $200 million investment deal for their Cheetah Vision production company, for 10 movies to be distributed by Lionsgate. The first is “Setup,” which shot in December and stars 50 and Bruce Willis, and will be released later this year.

I won’t be able to rap forever,” 50, a.k.a. Curtis Jackson said during a press conference on Saturday.

And I won’t be able to box forever,” added Floyd Mayweather. 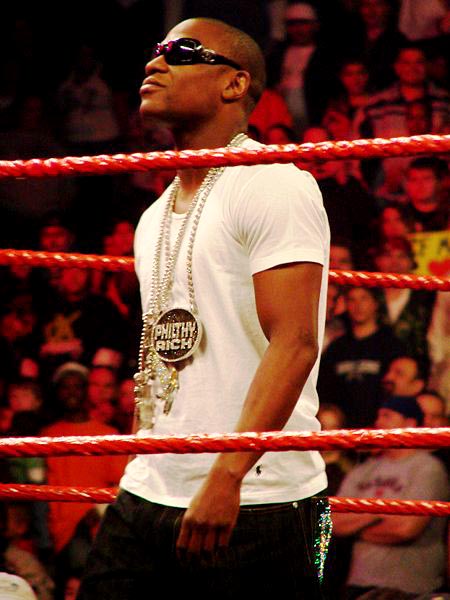 Mayweather, a Grand Rapids native, is a longtime friend of 50, who came to Grand Rapids three years ago for the boxer’s charity basketball game. 50 has since become a part-time G.R. resident, having filmed four movies in West Michigan. During Saturday’s press conference, 50 said again what he told a Grand Rapids audience, gathered to see the premiere of his movie Gun (now out on DVD), that he was “a work in progress.”(The rapper/actor previously filmed Caught in the Crossfire, and Things Fall Apart in Grand Rapids). He and Emmett said they plan to premiere “Things Fall Apart” in G.R. in March, while they’re in town shooting their next movie. As well as they’d like to work with Sylvester Stallone in the future — even though 50 Cent thought that Christian Bale did a pretty good job in The Fighter.

Boxing could be more real in films,” Jr. ended. Just hit the vids.