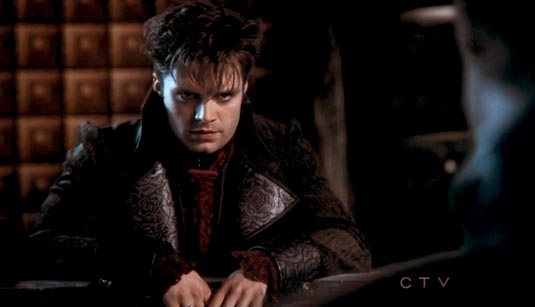 There is a big change coming to Once Upon a Time. ABC is eyeing a potential spinoff centered on the Mad Hatter, The Hollywood Reporter has confirmed. Sebastian Stan, who has played the Mad Hatter since 2012, will not be reprising his role later this season when the character returns, and the network has begun looking for a replacement. ABC and the producers hoped that Stan could have continued, but he was unavailable for long-term work. (he is going for the Captain America: The Winter Soldier.) Though the spinoff project is in the very early stages, ABC is pondering whether a short presentation will be filmed or a backdoor pilot will air later this season. It would be a late addition to ABC’s pilot pool and would be competing for a fall 2013 slot. Once Upon a Time executive producers Adam Horowitz and Eddy Kitsis are overseeing the spinoff idea and would act as showrunners on both series, if the Mad Hatter project gets a green light. This is a big move on ABC’s part to expand the Once Upon a Time franchise at a time when networks are relying on established franchises to kick-start new series, but Once Upon a Time has proven to be a consistent performer opening ABC’s Sunday night block so I’m thinking it just might work with the spin-off.

Continue Reading
Advertisement
You may also like...
Related Topics:Adam Horowitz, Eddy Kitsis, Once Upon a Time, Sebastian Stan