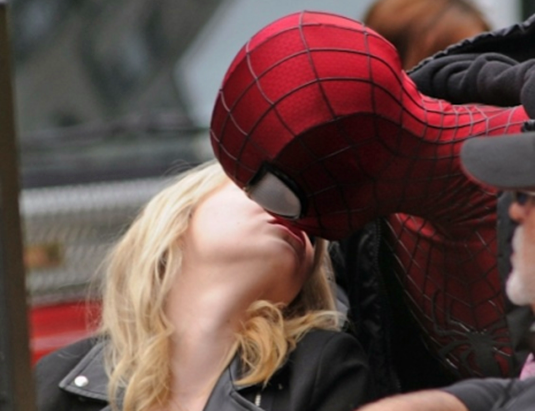 We’ve seen a number of photos from the set of director Marc Webb‘s The Amazing Spider-Man 2 thus far, giving us peeks at Paul Giamatti‘s Adidas approved supervillain Rhino, but new set photos show that the Rhino may be retaliating with some kind of exoskeleton. Furthermore, we’ve recently seen Spider-Man (Andrew Garfield) has a very difficult job to save the bus full of people. There are also some photos of our hero now hanging out with a little Spidey. The latest chapter in the Spider-Man story also stars Emma Stone, Dane DeHaan, Shailene Woodley, Jamie Foxx, Felicity Jones, Chris Cooper, and Sally Field. The Amazing Spider-Man 2 is set to be released in theaters on May 2nd, 2014. Filming took place over the weekend on Park avenue in New York City. Check out the set photos below and a kiss from Emma, of course!

In The Amazing Spider-Man™ 2, for Peter Parker (Garfield), life is busy – between taking out the bad guys as Spider-Man and spending time with the person he loves, Gwen (Stone), high school graduation can’t come quickly enough. Peter hasn’t forgotten about the promise he made to Gwen’s father to protect her by staying away – but that’s a promise he just can’t keep. Things will change for Peter when a new villain, Electro (Foxx), emerges, an old friend, Harry Osborn (DeHaan), returns, and Peter uncovers new clues about his past.