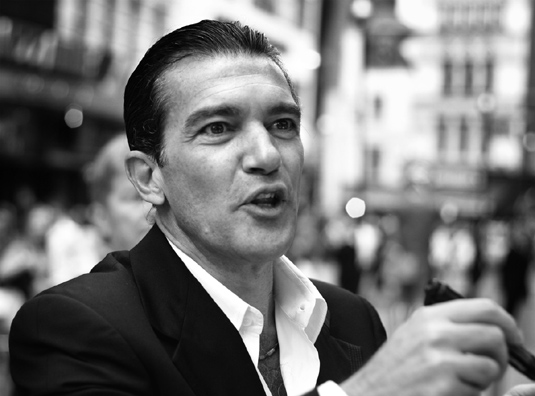 We know that Antonio Banderas is a very busy these days. After Woody Allen’s You Will Meet a Tall Dark Stranger, he works with Steven Soderbergh on Haywire. He will star in Pedro Almodovar’s The Skin I Inhabit, Jean Jacques-Annaud’s Black Gold, Simon West’s Salvador Dali biopic and he will voiced Puss in Boots again. But his next film also is is a psychological thriller Solo and he will not be just the star of the movie, he will also direct it. Ok, that’s not his first time. He already directed two movies: Crazy in Alabama (1999) and Summer Rain (El camino de los ingleses 2006). According to Variety, Solo is “a psychological thriller with sci-fi touches turning on a Spanish colonel suffering post-conflict trauma.” Banderas will play the colonel and direct from an orginal screenplay by Erik Jendresen. Banderas’ third film as a director will shoot in English but Solo will star Spanish actors and with a budget at about Euro10 million ($14 million). “Unfortunately, to reach large international markets, you have to shoot in English,” Banderas said at Spain’s Valladolid Festival Saturday, where he was honored with a Golden Spike career achievement award. Solo will probably be released in 2012.
Continue Reading
Advertisement
You may also like...
Related Topics:Antonio Banderas