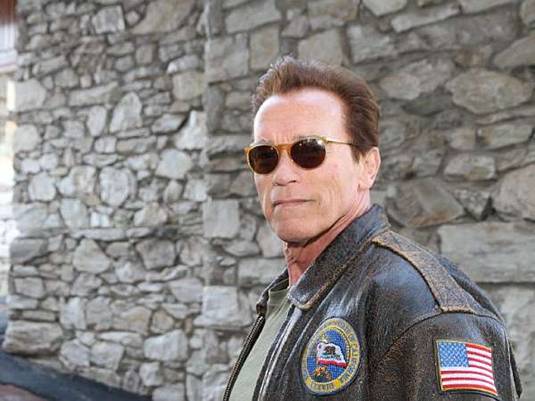 As mentioned, time is not on his side and Arnold Schwarzenegger apparently saying yes to most offers that come his way. Like John McClane says in Live Free or Die Hard ‘I’m getting too old to jump out of cars.’ Seriously, the 64-year old ex-Governor is currently shooting Kim Ji-Woon‘s gritty thriller The Last Stand where he plays a border sheriff alongside Forest Whitaker and Johnny Knoxville. Arnie is also returning in a big way in The Expendables sequel with Sylvester Stallone, Bruce Willis, Jason Statham, Chuck Norris and Jean-Claude Van Damme, set for release in August 2012. (Unfortunately, an Expendables 2 stuntman has died following an explosion while filming on the Bulgarian set) Sounds like Schwarzenegger is picking better material now than he was back in his glory days – The Governator is set to star in another action flick Black Sands that is said to be a cross between Man on Fire and High Plains Drifter. Wow! Whatsoever, the stunt coordinator-turned-director pair of Scott Waugh and Mike McCoy (duo behind Act of Valor) are reportedly on board to direct, with a script from Skip Woods (The A-Team). Black Sands will begin shooting on April 1st, 2012. Schwarzenegger will play a loner facing off against an arms manufacturer and their private army, the same way he has done in The Last Stand. The film is set in the American Southwest. To get a sense of their style check out the trailer for Waugh & McCoy’s upcoming Act of Valor that uses active duty U.S. Navy Seals as actors. The characters they play are fictional, but the weapons and tactics used are real. Stay tuned. [youtube]http://www.youtube.com/watch?v=ZnlPgo9TaGo[/youtube]