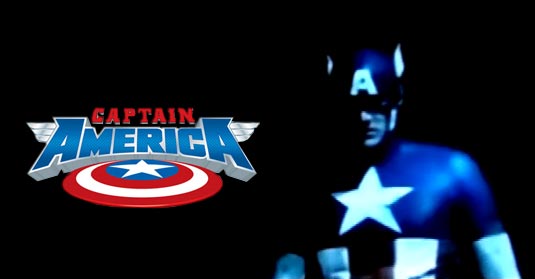 The teaser trailer for Captain America: The First Avenger debuted on Comic Con 2010. The teaser opened with a camera panning across the scratched yet shiny surface of Cap’s shield. Playing against the shield was footage from WWII, while FDR spoke on the soundtrack, talking about Pearl Harbor and the challenge ahead. In many ways the shield itself would have been a great teaser, but then it cut to a shot of the silhouette of Captain America, standing in what looked like a warehouse. And then another flash, this time of Cap in an action pose, flinging the shield right at the screen. Captain America: The First Avenger will focus on the early days of the Marvel Universe when Steve Rogers volunteers to participate in an experimental program that turns him into the Super Soldier known as Captain America. Born during the Great Depression, Steve Rogers grew up a frail youth in a poor family. Horrified by the newsreel footage of the Nazis in Europe, Rogers was inspired to enlist in the army. However, because of his frailty and sickness, he was rejected. Overhearing the boy’s earnest plea, General Chester Phillips offered Rogers the opportunity to take part in a special experiment… Operation: Rebirth. After weeks of tests, Rogers was at last administered the Super-Solider Serum and bombarded by “vita-rays.” Steve Rogers emerged from the treatment with a body as perfect as a body can be and still be human. Rogers was then put through an intensive physical and tactical training program. Three months later, he was given his first assignment as Captain America. Armed with his indestructible shield and battle savvy, Captain America has continued his war against evil both as a sentinel of liberty and as leader of the Avengers. Starring Chris Evans as Steve Rogers, Hayley Atwell as Peggy Carter, Tommy Lee Jones as Col. Chester Phillips, Hugo Weaving as Red Skull, Stanley Tucci as Dr. Abraham Erskine, Samuel L Jackson as Nick Fury, Sebastian Stan, Toby Jones and Dominic Cooper. Captain America: The First Avenger will be released in the US on July 22, 2011 and distributed by Paramount Pictures. [flv]http://kinogallery.com/trailers/C/kinogallery.com_Captian_America_The_First_Avenger_COMIC-CON_TRAILER.flv[/flv]
Continue Reading
Advertisement
You may also like...
Related Topics:Captain America: The First Avenger, Chris Evans, Dominic Cooper, hayley atwell, Hugo Weaving, Sebastian Stan, Stanley Tucci, Toby Jones, Tommy Lee Jones