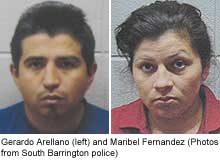 The audience at a weekend performance of “Hannah Montana: The Movie” included the usual hordes of young girls, along with a Hoffman Estates man operating a video camera from his seat, authorities said today. Gerardo Arellano and his wife, Maribel Fernandez, both 32, were arrested after police officers found him with the camera balanced on his leg during a showing in South Barrington of the new Miley Cyrus movie, the weekend’s top money maker, officials said. Arellano was charged with trying to make an illegal copy of the film, authorities said…read more [WorstPreviews]
Continue Reading
Advertisement
You may also like...
Related Topics:Hannah Montana The Movie, Miley Cyrus