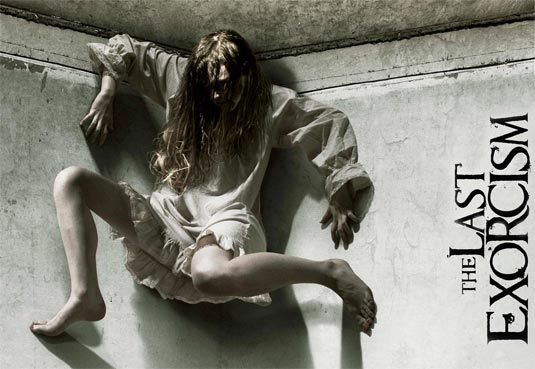 Lionsgate has released a creepy looking poster for the upcoming horror thriller The Last Exorcism starring Patrick Fabian, Louis Herthum, Caleb Landry Jones, Ashley Bell, Iris Bahr and Tony Bentley. Synopsis: When he arrives on the rural Louisiana farm of Louis Sweetzer, the Reverend Cotton Marcus expects to perform just another routine “exorcism” on a disturbed religious fanatic. An earnest fundamentalist, Sweetzer has contacted the charismatic preacher as a last resort, certain his teenage daughter Nell is possessed by a demon who must be exorcized before their terrifying ordeal ends in unimaginable tragedy. Buckling under the weight of his conscience after years of parting desperate believers with their money, Cotton and his crew plan to film a confessionary documentary of this, his last exorcism. But upon arriving at the already blood drenched family farm, it is soon clear that nothing could have prepared him for the true evil he encounters there. Now, too late to turn back, Reverend Marcus’ own beliefs are shaken to the core when he and his crew must find a way to save Nell – and themselves – before it is too late. The film is written by Huck Botko & Andrew Gurland, produced by Eli Roth and directed by Daniel Stamm (A Necessary Death). Strike Entertainment and STUDIOCANAL present an Arcade Pictures production. The Last Exorcism is due out in theaters on August 27, 2010. In case you haven’t already watched it, check out The Last Exorcism trailer.