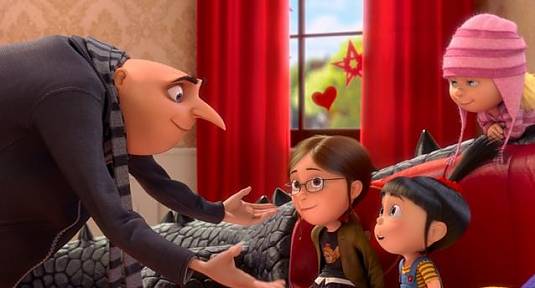 Let’s get straight to the point with this report: a huge Despicable Me 2 update is waiting for you in the rest of this report! In other words: we have four brand new TV spots and one pretty cool Cheetos promo video, and we’re sure you’re going to love it! Don’t thank us, thank Gru and his cute minions… Directed by Chris Renaud and Pierre Coffin, the sequel to the 2010 animated film Despicable Me is set to hit theaters on July 3rd, 2013, and stars Steve Carell, Kristen Wiig, Miranda Cosgrove, Russell Brand, Steve Coogan, Ken Jeong and Benjamin Bratt.

An all-new comedy animated adventure featuring the return of Gru, the girls, the unpredictably hilarious minions… and a host of new and outrageously funny characters.

This time, the film will center on an ex-villain Gru, whose calm and unexciting new life is turned upside down when Agent Lucy Wilde of the Anti-Villain League visits him for a purpose. He’s assigned to help take down Eduardo, armed with some cool new cars, gadgets and weapons. In case you’ve missed our previous reports, here’s the first trailer, posters, images and more TV spots for you! Let us know what you think & stay tuned for more!
Continue Reading
Advertisement
You may also like...
Related Topics:Benjamin Bratt, Chris Renaud, Despicable Me, Despicable Me 2, Kristen Wiig, Russell Brand, Steve Carell, steve coogan