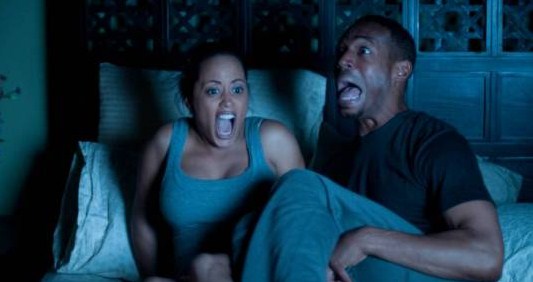 Horror + comedy + thriller = Marlon Wayan‘s upcoming hilarious horror spoof titled A Haunted House! And when you have a house, ghosts and stuff like that – you immediately know that this is going to be a parody of the Paranormal Activity franchise! Today we have some super-funny first images from the whole thing to share with you, so what can I tell you guys – don’t miss the fun! A Haunted House comes from director Mike Tiddes, while Marlon Wayans and Rick Alvarez are behind the script that will center on newlyweds Malcolm and Kisha who move into their dream house, but – they quickly find they’re not alone! But it’s not the house that’s haunted, but his wife that is possessed with spirits – or as Malcolm calls it – relationship baggage. So, Malcolm decides to hire everyone from a priest to modern day ghost busters to rid her of the demon, determined not to let the evil spirit ruin his marriage… or his sex life for that matter. Sounds great, indeed! But that’s not such a surprise when we have the creators of that Scary Movie on board for another parody, right? Beside Wayans, this movie also stars Nick Swardson, David Koechner, Essence Atkins, Cedric the Entertainer, Bobbie Lee and Dave Sheridan. A Haunted House opens on January 11th, 2013. What do you think?