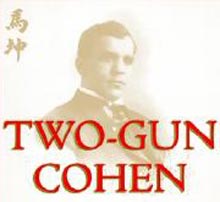 Doug Liman has signed on to direct a drama based on the life of Morris Abraham ‘Two Gun’ Cohen.

As you see, we’ll soon have a chance to watch another biopic, and this time, we’re talking about ‘Two-Gun’ Cohen, the English bodyguard of Chinese leader Sun Yat-sen in the 1920s.

“He’s a thief and a con man who goes to China with visions of self-aggrandizement,” said Liman, and continued: “but while he’s there he falls for the country and for a woman. The story falls off the shelf without having to twist the facts. It’s almost hard to believe it happened.”

In case you have no idea who we’re actually talking about, Morris Abraham ‘Two-Gun’ Cohen was born in London and moved to China after serving in World War I in 1922.

He trained Sun Yat-sen’s army, who overthrew China’s last imperial dynasty, even though he didn’t speak Chinese, and moved up to be one of Sun Yat-sen’s personal bodyguards. Two-Gun Cohen then fought with the Chinese after Sun Yat-sen’s death in 1925 against the invading Japanese army.

So, now we know that Matt Brown is writing the script which Doug Liman will direct from. Rob Reiner and Alan Greisman will produce, joining forces with Chinese company Beijing Galloping Horse Film & TV Production. The movie will be shot in China and is described as a “very international movie.”

Here’s what Liman had to say about that: “I’ve been making extremely American movies and this is a chance to make a movie that plays out on an international scale: we’ve got the Westerners, the Brits, the warlords and then all the Chinese culture.”

This definitely sounds interesting, I’m sure you’ll all agree? If that’s right, let us know, and, as usual, stay tuned for more updates on the Two-Gun Cohen story!

Continue Reading
Advertisement
You may also like...
Related Topics:Doug Liman